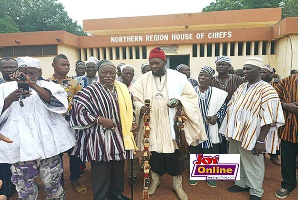 The Northern Regional House of Chiefs has declared the enskinment of the current Bunkpurugu Chief Alhaji Abuba Nasimong null and void, MyNewsGh.com reports.

In a ruling in Tamale on Thursday August 29, 2019, the Court observed that the chief could not trace his lineage to any of the two known royal gates to be enskinned as a chief of the area.

“From the evidence that came before us only two families have in the past succeeded the Bunkpurugu skin and our ruling is that it is only those two families who are royal families to Bunkpurugu and only they can succeed the skin”, the ruling stated

Lawyer Fataw Yakubu revealed that the two notable families are the Jamong and the Jafeok families and that any other family apart from these two cannot claim to be a royal who ascend to the Bunkpurugu skin.

Zeroing on the Chief of Bunkpurugu in particular he said “The second respondent [Alhaji Abuba Nasimong] who was enskinned by the Nayiri could not trace his royal lineage from the time the Bunkpurugu skin was established in Ghana. He also traced his royal lineage from the time the Konkombas were in Togo so his claim to royalty is not founded on enskinment in Ghana but rather enskinment in Togo. But the skin in Togo is different from the Skin in Ghana so we cannot allow him to prevail because that will create a lot of confusion. It will mean that all those royal families from Togo are also qualified and we cannot accept that situation. It is very technical issue at this point…you see chieftaincy there are two criteria, royal family and royal lineage. You can come from the royal family but you don’t have royal lineage…either you come from the matrilineal line when the skin is patrilineal or you coming from a patrilineal when the skin is matrilineal”.

He added “So what we found was that even though he says he is from the Jafeok family, we cannot find any ancestor of his who succeeded to the skin in Ghana”

Lawyer Fataw Yakubu also explained that the chieftaincy rotates and going by that, the last chief Lambon Tapang was from the Jafeok family and was now the turn of the Jamon family and not from the latter’s.