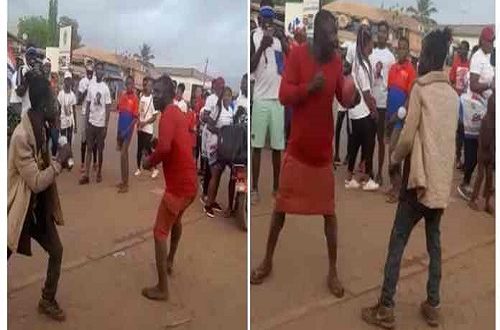 NPP’s health/Peace walk at Nkwanta in the Oti Region couldn’t end without ‘controversy’ as two madmen were captured exchanging blows.

In the video sighted by browngh.com, the two mad men could be seen trading blows as people gathered around watch in dismay .

The fight got so intense that the people around separated them.

Some people could also be heard shouting and giggling while the madmen were fighting for reason best known to them.

The Health Walk at Nkwanta was organised by the parliamentary candidate for Nkwanta South Constituency, Sherifa Tijani.

The Health Walk was geared towards preaching peace to the people of Oti Region ahead of December 7 Elections.