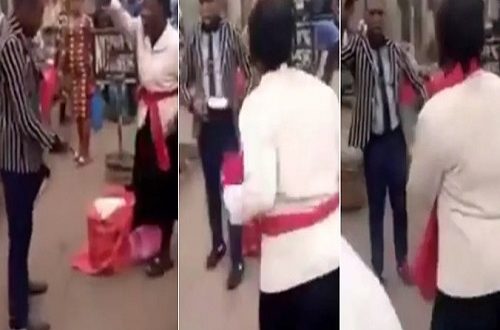 Nigerians have questioned the anointing on two evangelists as they were spotted in a tough battle over preaching spot at Ikeja bus stop in Lagos.

The female evangelist was not ready to lose her spot to her male counterpart who had already set up his equipment and began his ministry.

In a video that has since gone viral, the female preacher could be seen charging at the male preacher and hurling abuses at him while the man was firing hot ”prayers” against her.

‘ Idiot, Ashawo preacher’ were some unpalatable words the female preacher used on her colleague who only commanded her to get away.

After successfully snatching the microphone from her colleague, the female evangelist tied her headscarf to her waist, an indication she was a red belt champion, ready for the spiritual battle.

In what was a brief but interesting fight, the female precaher conceded defeat and attempted to walk away, but that was only after cursing and spitting all over.