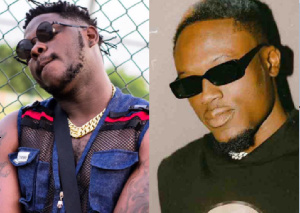 What started as a little argument has escalated into a battle of insults as two key members of the Arab Money Gang (AMG) are at each other’s throats.

The once beautiful relationship between Medikal and Okese1 has come to a sudden halt as the two were captured on Twitter in a back and forth argument.

This was after Okese1 alleged that Medikal secretly called Andy Dosty on phone and thanked him for kicking him out of his studio.

He said Medikal told Andy Dosty in a phone conversation that he [Okese1] is disrespectful and as such, deserves such a treatment from the radio presenter.

Reacting to the allegations, Medikal took to Twitter on February 16, 2021, to talk about how Okese1 has betrayed their friendship by spewing lies about him.

He wrote: “It’s pathetic how people throw several years of friendship away for a 24-hour clout”.

Okese1 who was obviously irritated by Medikal’s tweet responded to him saying:

“Clout? Are you okay? You mess up you no go apologize. You dey there dey make mouth. If ebi any artiste you go rant anyhow. You meet your meter. Don’t try boy! Years of friendship wey you no appreciate my efforts and acted like a dummy. You rather went into a studio to record a diss song for me. Talking about me being ungrateful. You den me, who should thank his fellow brother.”

The back and forth did not end there as Okese1 took to Instagram live for an extended version of his rebuttal.

In a 30 minute video, the ‘Yie Yie’ hitmaker accused Medikal of being an ungrateful friend after he helped him uplift his career.

He said Medikal had nothing when he entered into the music scene and he was one of the few friends that supported him at every step of his career.

“When you met me, I was already up. You were the one coming to me with your problems and I was helping you. I offered you my help in any way I could. If you won’t appreciate me, don’t tarnish my image,” he fumed.

Okese1 also emphasized that unlike Medikal he was already rich before joining the AMG crew.

Last week, Hitz FM’s Andy Dosty sacked Okese1 from his show over claims that the musician had been rude to him. After walking out, Okese1 rained insults on Andy Dosty via Instagram.

While indicating that the conduct Andy Dosty was unprofessional, Okese1 said his respect for the radio presenter had dropped. Andy Dosty later apologised as he laid away “all arrogance”.

Previous Chief arrested in contract killing plot targeting another chief
Next Stop comparing us, I’m not on Sarkodie’s level – Medikal