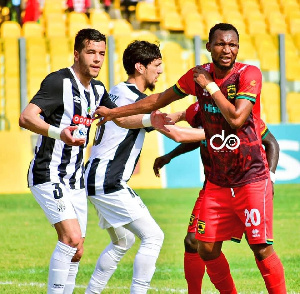 When that Kwame Poku strike hit the back of the Setif net, it felt as though Kotoko were on their way to victory.

Momentum swung to their side and Gama and Poku began to see much of the ball, exchanging some passes and making moves which should have at least fetched them a goal.

Then against the run of play, ES Setif got the equalizer. A quick counter, a tailored cross in the Kotoko box met the thumping header of unmarked Mohammed Amoura to draw parity. This happened in the 73rd minute.

Kotoko was stunned and Setif, having realized that their opponents were not in the best place mentally, added a second that turned out to be the winner.

With few minutes left to play, Kotoko had a chance to leave the Accra Sports Stadium with a draw but Naby Laye Keita missed from the spot.

The results mean, Kotoko have got it all to do in the return fixture in Algeria. Anything other than a victory will spell their end in the CAF Confederations Cup.