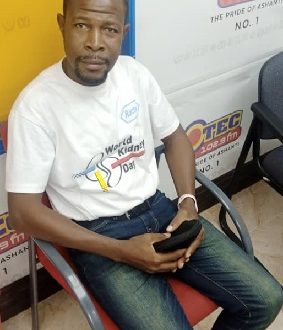 Kidney Health Foundation, a non-governmental organization has warned that more men are dying of kidney diseases than women due to alcohol intake and sexual enhancing drugs (aphrodisiacs) that can cause eternal health damages to one’s kidney.

According to the Public Health Officials, the indiscriminate use of aphrodisiac is gradually becoming a major cause of kidney failure in Ghana.

‘’More men are dying of kidney diseases than women due to alcohol intake and sexual enhancing drugs that can cause eternal health damages to one’s kidney’’, Pragram’s Manager for the Kidney Health Foundation, Silvanus Gatorwu disclosed this during   a discussion on the Kumasi based OTEC 102.9 FM’s morning show,” Nyansapo ” on Tuesday September 20, 2022.

The NGO in the same light explained that, excessive use of carbonated drinks also creates major problems for the kidney to perform its functions to the brim.

Mr Katorvu noted that, although all genders are reporting issues of kidney failure, most of the reported cases turn out to be men who have consistently used aphrodisiacs to enhance their sexual drive.

“Unknown to many, some of these drugs have chemical substances which can cause liver or kidney problems, creating health problems for themselves”

“We are once again warning the public, these aphrodisiacs have substances that destroy your kidney beyond repairs, that’s why we have consistently embarked on massive education on the need to ensure kidney health by avoiding certain practices”. He told the host, Captain Koda.

According to health experts, while in some countries people in their 60s and 70s those often diagnosed to have kidney issues, the situation is different in Ghana because it is prevalent among persons in their 30s and 40s.

“Averagely, we see people with kidney diseases who are in their forties. In some cases some are even in their teens and this should be a source of concern for us all,” Mr. Gatorwu told noted