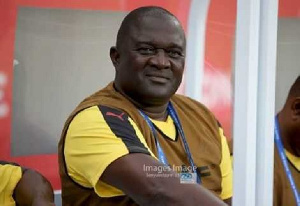 Hearts of Oak’s Team Manager, Sabahn Quaye has been reportedly sacked by the club, information reaching footballghana.com has revealed.

The Ghanaian giants in the last few days have been in the news for all the wrong reasons.

Earlier this morning, an official club communique announced that they have parted ways with head coach Kosta Papic.

In addition, goalkeepers’ trainer Ben Owu has been relieved of his duties and will no longer be working with Hearts of Oak.

Subsequently this evening, information from sources has revealed that team manager Sabahn Quaye has been sacked by the Phobians.

It is understood that the long-serving team manager of Hearts of Oak exposed some board members of the club of manipulating the selection of coaches in the team at an emergency meeting.

With the said board members unhappy, they have forced his sack from the club.