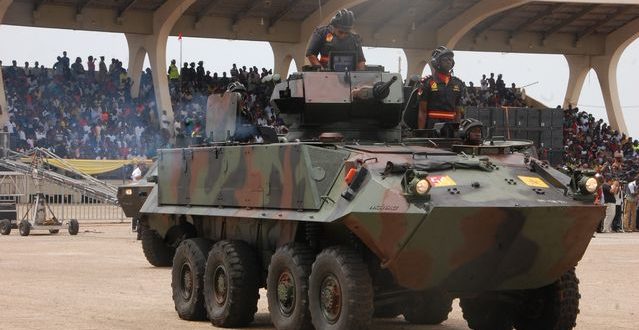 The Ghana Armed Forces (GAF) has received a major boost to its combat vehicles and other array of cars as government presents some eighty-four (84) multi-purpose vehicles to the security establishment.

The vehicles presented according to President Akufo-Addo, who presided over the Commissioning ceremony at the Abugah Square, Gondar Barracks, Burma Camp, are thirty-three (33) armoured personnel carriers, forty one (41) assorted Toyota vehicles, three (3) water tankers, one (1) self loading recovery track, one (1) refrigeration van and five (5) utility vehicles for waste disposal and management.

President Akufo-Addo in his statement said government has consistently kept appraised the needs of the Armed Forces”.

“As your Commander-in-Chief, I am taking steps to ensure that your needs are met” President Akufo-Addo said.

President Akufo-Addo, in his remarks, urged the Ghana Armed Forces to continue in its efforts aimed at maintaining the peace that Ghana continues to enjoy.

“I urge you to continue to collaborate with the Ministries of National Security, the Interior, Foreign Affairs, Finance, and with the Ghana Revenue Authority as well as all relevant agencies to help maintain a resolute, robust front that will deter potential aggressors from having any thoughts of attempting to destabilize our country or derail our socio-economic gains we have chocked so far” President Akufo-Addo emphasized.

The President further admonished the Armed to ensure that it falls on the high level of discipline it is noted for as an institution to maintain the vehicles that have been presented to them.

The Chief of Defence Staff (CDS), Lieutenant General Obed Boamah Akwa, in his speech said that the gesture of the government of Ghana in presenting the eight four (84) Multipurpose vehicles will certainly reduce the transportation challenges of the GAF.

“By this gesture, the gap has been narrowed as far as our transportation requirements are concerned” the Chief of Defence Staff stated.

The Minister for Defence, Dominic Nitiwul reiterated Government’s commitment to retooling the Ghana Armed Forces. He noted that the vehicles presented will go a long way to support the Armed Forces in the performance of their duty of securing the territorial integrity of the Republic.

“These vehicles will enable the Ghana Armed Forces to perform its duty of protecting the territory of Ghana, like broader security and Patrols and effectively support internal security operations” Dominic Nitiwul said.