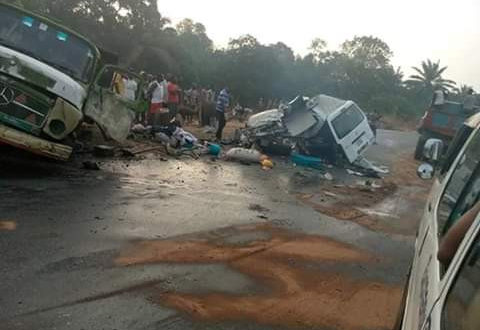 Three people have been confirmed dead in a two-vehicle crash at Beposo, near Teacher Mante, along the Suhum-Nsawam highway in the Eastern Region, police have said.

The victims were among 31 passengers in a KIA bus that crashed with a fully loaded DAF articulated truck registered AE 1913–12 which was travelling from Kumasi to Aflao.

The police, in a statement, said the incident occurred around 1:45 am at a section of the road at Beposo on Saturday.

The statement indicated that the truck, which was driven by one Yahaya Iddrisu, was loaded with agro chemical products belonging to Bentronic Company in Kumasi.

According to the statement, the unidentified driver of the KIA bus, in an attempt to overtake another in front of him, ran into the articulated truck that was coming from the opposite direction.

The police added that the remaining occupants of both vehicles, who suffered various degrees of injury, were rushed to the Suhum Government Hospital.

The police said the KIA bus, in the process, ran into a ditch at the opposite lane and overturned, with the wheels facing the road.

The statement added that personnel of the National Fire Service and the National Ambulance Service from Suhum were in attendance to assist in conveying the victims to hospital.

“Efforts are being made to remove the mangled articulated truck which blocked one side of the road … to pave the way for the free flow of traffic,” it added.