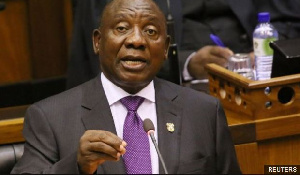 Ghana is a citadel of democracy – SA President

President of the Republic of South Africa, Cyril Ramaphosa, has described Ghana as a Citadel of Democracy and an example to the rest of the African continent.

In his address before the closed-door bilateral talks, President Cyril Ramaphosa, said: “Ghana really is what he will call the Citadel of Democracy on the African continent”.

“We hold Ghana very highly, you are a beacon of that democracy and you lead the continent in this regard” President Cyril Ramaphosa stated.

“We draw inspiration from you and our bilateral relations for us are solidified by the pull that you have and what Ghana stands for; good governance, respect for human rights, ethical type of government, rule of law and fundamental freedoms. For us, this is what Ghana represents” President Ramaphosa added.

In his address, the South African leader described recent xenophobic attacks in his country as a “Faultline” that his administration is confronted with. He further indicated that his government is very committed to dealing with the phenomenon in a wholistic manner.

“I also want to thank you for having received my Envoys who came here after the challenging period that South African went through. The issue of migration that flows into our country and the way it is dealt with continues to be a faultline that we need to continue addressing” the South African leader stated.

Ghana and South Africa recently signed a visa free agreement between their respective countries. However, the agreement is yet to come into force. In his address, President Cyril Ramaphosa, assured President Akufo-Addo that a delegation from his country will soon be in Ghana to work out the modalities and finalize same.

President Ramaphosa registered his sincere appreciation to President Akufo-Addo and by extension Ghana, for supporting their successful bid to become a non permanent member of the United Nations (UN) Security Council for the 2019/2020 period. He also thanked the people and government of Ghana for creating a conducive environment for South African companies to do business in Ghana.

President Akufo-Addo in his address said Ghana and South Africa have no reason not to pursue stronger trade ties beyond what currently exists between the two countries. He noted that with the signing of the memorandum of understanding to create a Joint National Commission for Ghana, South Africa relations, the possibilities should be endless.

Ghana according to President Akufo-Addo, is readily available to assist South Africa in every way possible as she assumes the chairmanship of the African Union (AU) in the year 2020.

President Akufo-Addo at a joint press conference with his South African counterpart added his voice to the issue of Xenophobic attacks in South Africa indicating that the way and manner in which the South African President has dealt with the issues so far demonstrates his commitment to finding a lasting solution to the phenomenon.

President Akufo-Addo after the official meetings and engagements hosted his visitor to a working lunch at the banquet hall of the Jubilee House. President Cyril Ramaphosa’s visit to Ghana is part of a three West African nation tour that has taken him to Guinea and is set to end with a visit to Togo.