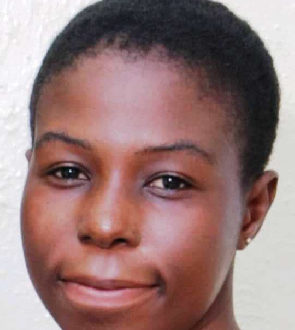 Another girl missing in Kumasi

Members of a family in Kumasi in the Ashanti region are shattered following their inability to locate their 20-year-old girl.

Celestina Tasun, a student of Armed Forces Senior High School in Kumasi, left her Akyeremade home on Thursday and has since not been found, a family spokesperson said.

Ms Tasun has been living with a family house help in the Atwima Kwawoma district of the ashanti region since 2016.

She is about 5 feet tall and fairly black in complexion.

Karikari Karikari Gyamfi, one of her adoptive parents, told GHOne news’ William Evans-Nkum “my girl has never stayed out for that long… now I’m worried considering the wake of kidnappings in the country.”

The case has been reported at the Afasiebon Police Station.