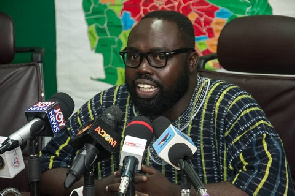 This is after some officers of the National Identification Authority (NIA) were arrested at Awudome for allegedly registering people for the national identity card, Ghana Card, at night.

The Daily Graphic reported that they were arrested at a home near the St Theresa Catholic Church in Accra on Tuesday night at about 7:30 pm.

Deputy General Secretary of the NDC, Peter Otokunor, at a press conference on Wednesday, said this was evidence of a process “hit with massive fraud, irregularities and wanton abuse of the process.”

The party also mentioned Akweteyman, Abbosey Okay, Mataheko as places “where the NPP is collaborating with registration officials to frustrate the process” for NDC members.

“In some cases, applicants are made to fill the form and are asked to come three days later for their biometrics to be taken. Who does this?”

In light of these issues, Mr. Otokunor said the NDC has “enough reason to believe that the NPP intends to use the acquisition of the Ghana Card as one of its methods towards manipulating and rigging the 2020 elections.”

He posited that there was a two-pronged approach by the government which started with the elimination of the voter ID card as a document used in the registration exercise “thereby disenfranchising a lot of grassroots voters who constitute the bulk of the support base of the NDC.”

In addition, Mr. Otokunor said the NPP is engaged in the secret registration of NPP members “in order to increase the numerical strength of the NPP members who hold the Ghana Card for the purposes of registering them as voters for the 2020 election.”

As a result, he urged NDC members to “fully participate and monitor the ongoing exercise keenly so as to expose any such irregularities and malpractices.”

The NIA started the mass registration and Ghana Card issuance exercise in the Greater Accra Region from Monday, April 29, 2019, and is expected to end on Saturday, July 6, 2019.

The region has been divided into two zones: Accra West and Accra East, where registration centres have been opened at specific locations.