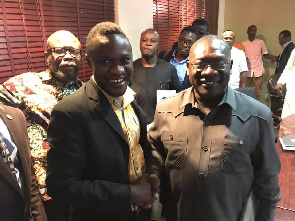 The Ghana League Clubs Association has apologized to the Parliamentary Select Committee on Youth, Sports and Culture after details of their meeting on Wednesday were leaked to the media.

The parent body for clubs in the country suspects the ‘moles’ were part of their delegation who attended the meeting.

Parliament’s Select Committee on Youth, Sports and Culture invited clubs for a meeting to see the way forward after an impasse between Premier League clubs and the Normalisation Committee scuttled the Special Competition.

A portion of the statement read: ”We found the actions of those members as disgraceful and embarrassing if weighed against the sound advice offered the clubs by the Honourable Chairman of the Committee, Hon Kofi Alex Kofi Agyekum at the start of the meeting.

”We wish to render our profound apology to the Honourable Chairman and the Committee of Youth, Sports and Culture for that indiscretion and with the firm assurance that this unfortunate incident would never recur.”