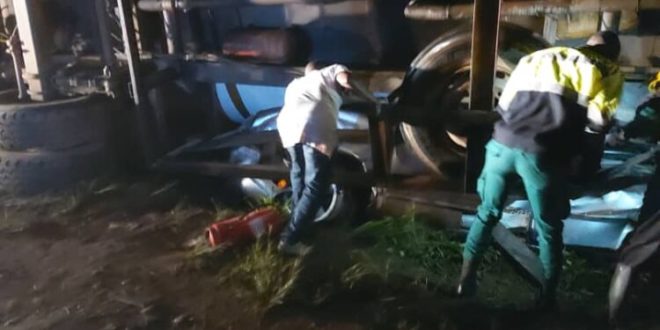 Reports reaching MyNewsGh.com indicates that three persons have been killed in yet another accident that happened at Amasaman in Accra.

The accident that happened on the night of Thursday October 15, 2020 was between a saloon car and a fuel tanker.

Eye witness at the scene say the fuel tanker was trying to avoid passing over a motorbike rider who had been involved in an acciden.

However, while swerving the motorbike rider, the tanker fell on the saloon car which had four people on board.

Three of the passengers lost their lives on the spot but the driver survived.

Occupants on the tanker survived the accident but videos from the accident scene point to the fact that people were siphoning the fuel.

Personnel from the Ghana Police Service and the Ghana Fire Service came to the scene to ensure vehicular traffic and made effort to rescue surviving victims.