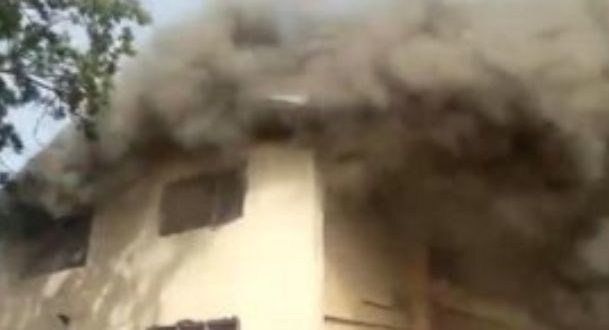 The Tolon Senior High School (SHS) in the Tolon District of the Northern Region has been forced to temporarily close down due to a fire outbreak in the school on Thursday, May 19, 2022.

The fire, which was said to have started on Thursday morning around 9:00 am, razed down the school’s entire girls’ dormitory block, 3news.com reports.

But for the intervention of the Ghana National Fire Service (GNFS) personnel in the Tolon District, the fire could have spread to other facilities in the school.

Although the cause of the fire outbreak is yet to be confirmed, the fire service indicated that an electrical fault could have started the outbreak.

The headmaster of the Tolon SHS, Amadu Issifu, said that the decision to shut down the school temporarily is to enable the authorities to make alternative accommodation arrangements for the affected students.

He indicated that the fire outbreak destroyed the valuables of affected students, including their chop boxes and school uniforms, and left them traumatized.

According to the report, the school will be closed down for a week.

Meanwhile, the District Chief Executive (DCE) for Tolon, Fuseini Salifu Issifu, has called on the National Disaster Management Organisation (NADMO) to intervene by giving the affected students some support.