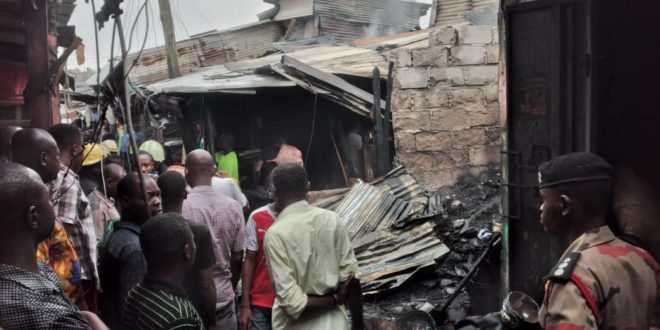 Fire swept through more than 10 shops at the leather and footwear section of the Kumasi Central Market on Monday morning, destroying properties worth thousands of Ghana cedis.

Items including leathers, bags, shoes, slippers, and sandals were burnt in the blaze.

Traders at the leather and footwear section of the Kumasi Central Market have begun counting their losses after fire ravaged more than 10 shops during a visit by OTECNEWS’ Reporter Henry Acquah to the scene Monday October 3, 2022.

The cause of the fire is not yet known. Firefighters spent hours trying to bring the situation under control.

Some affected victims who spoke to OTECNEWS narrated their ordeal and how much has been lost to the fire. “I had stocked my shop with leather. Everything has been destroyed. I had no access to salvage any on my items.”

“I brought restocked my shop just this Saturday with over 4,000 shoes. I was at home when I received a call that my shop is on fire. I have lost everything,” another shared.

Another eyewitness told OTECNews that: “I was asleep when I heard of the fire outbreak at the Kumasi Central market. I rushed to the market, and it was true that there was a fire outbreak. So I tried to help to contain the fire. As of the time I came to the market, I was passionate to help put out the fire, so I didn’t really ask what caused the fire.”

The Regional Fire Commander ACFO Henry Giwah, of the Ghana National Fire Service who spoke to the media revealed that fire personnel had difficulty in dousing the fire due to the materials set ablaze.

He indicated that investigations are presently ongoing to ascertain the cause of the fire.