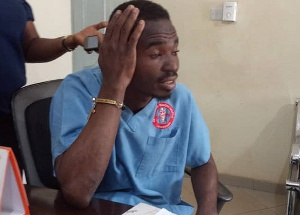 A confident trickster who has been posing as a medical doctor and swindling unsuspecting patients at the Kumasi South Hospital (Ashanti Regional Hospital) at Atonsu Agogo in the Asokwa Municipality of the Ashanti region has been busted, MyNewsGh.com reports.

The 33-year-old Selassie was caught wearing a Komfo Anokye Teaching Hospital branded overcoat with the name tag, “Dr Larbi” presenting himself as a medical practitioner who was on locum.

Records from the facility, however, gave him up when upon further checks it was observed that he is neither a medical officer nor an employee of the facility but was only parading himself as such to defraud unsuspecting persons.

Upon his arrest, he openly admitted he was not a doctor or nurse but claimed he engaged in the act of deceit for survival.

He has since been handed over to the Asokwa Police at the time of filing this story.