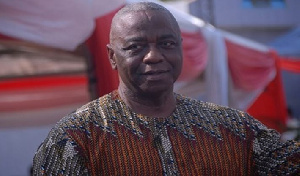 The National Security Advisor to ex-President John Dramani Mahama, has broken his silence on the procurement of the Israeli spy system; Pegasus, which was intended to be used by state security for cyber surveillance by the previous government, but eventually led to the jailing of two former board members of the National Communication Authority (NCA) and a deputy National Security Coordinator for 16 years.

Baba Kamara, disclosed that the US$4 million device, which the Akufo-Addo government, declared untraceable, has rather been in the custody of the Bureau of National Investigations (BNI), although the court which convicted the accused persons, have asked that their properties are sold to retrieve the lost money.

The ex-Ghana’s High Commissioner to Nigeria, denied keeping the spy device in his house, saying “it was not in my house; rather warehouse. The BNI came and inspected and went a (sic) pick the machine. I wrote a statement… It is with the state. It was never sent to my house, but a warehouse”.

The Herald’s investigations, have revealed that the Criminal Investigations Department (CID) of Ghana Police Service, had nothing to do with the case. It was solely investigated by the BNI and handed over to the Attorney-General’s Department for prosecution.

Ex-CID boss, Maame Tiwaa Addo-Dankwa, in a short telephone conversation with The Herald, confirmed her previous office, did not investigate the NCA case.

The Herald’s monitoring of the trial, showed that Baba Kamara, was neither used as Prosecution witness nor defense witness in the case presided over by Justice Eric Kyei Baffour, whose conduct on the case, has at various times been subject to heavy criticism by both the Court of Appeal and the Supreme Court Justices.

It emerged in court that, the leader of the Prosecution, the Director of Public Prosecution (DPP), Yvonne Atakora Obuabisa, had played some roles ahead of the procurement of the device.

Baba Kamara, made the denial in a text message when his name was mentioned by Lawyer Dominic Ayine, the National Democratic Congress (NDC) Member of Parliament (MP) for Bolgatanga East Constituency in the Upper East region, while on Joy FM’s newsfile programme on Saturday, in relation to the NCA trial.

But ahead of the programme, the National Security Advisor to Mahama, had since last Tuesday’s conviction of Eugene Baffoe-Bonnie, the former NCA Board Chair; William Tetteh Tevie, former Director-General of the NCA; Alhaji Salifu Mimina Osman, a former Deputy National Security Coordinator, come under heavy criticism in certain circles.

Interestingly, it was Deputy Minister of Works and Housing in the Akufo-Addo government, Eugene Boakye Antwi, who went public bashing the Attorney-General’s department, saying Baba Kamara, should have also been brought to book in the NCA trial.

According to Mr Boakye Antwi, Alhaji Baba Kamara, who at the time played a supervisory role for the installation of the cyber-security equipment in his house, has been left off the hook, instead of being made to face trial together with the jailed officials.

Though Eugene Boakye Antwi, ascribes to the fact that the rule of law has prevailed in the case, he still maintains there is still more to the story than meets the eye.

While expressing dissenting thoughts about the Court ruling, the MP for Subin Constituency, questioned why Baba Kamara, after implicating himself in the scandal by running a test on a national cyber-security equipment in his house, was left unscathed in the judicial process.

“This is a clear case of a president appointing you to a position of trust…and you end up benefitting from that position… Five persons were initially sent to court, two were acquitted and three have been convicted, meaning that the wheels of justice were seen to be working…” he said in reaction to the ruling on Good Morning Ghana, Wednesday, May 13, 2020.

Adding that; “There’s more to this story than meets the eye and this is where Ghanaians must be asking serious questions…because it’s wrong and we must say it to Baba Kamara that he acted irresponsibly… what we can say as people with trained minds is that sometimes the lawyers too get it wrong and wrong big time because this thing is self-incriminating and Baba Kamara should have been part of the people who were sent to court. Why do you charge the subordinate and leave him off the hook…I want to know why Baba Kamara wasn’t charged…”

The businessman, George Derek Oppong, who sold the device was acquitted and discharged, although he admitted keeping some money made from the sale.

Nana Owusu Ensaw, a former board member, was earlier acquitted and discharged by the Court of Appeal.

In January this year, William Tevie, the Second Accused person, had told the court that contrary to claims of Secrecy by the State over the purchase of the infamous Pegasus system, it was acquired with the full knowledge and awareness of government, the Security Agencies and the Attorney General’s Department.

The former NCA Director-General, who at the time had opened his defence on Thursday January 23, 2020, made the disclosure on January 30, 2020, when he answered questions from the lawyer for the fifth (5th) accused person, Rendolf Twumasi Ankrah, as part of his testimony.

You also testified that there was a meeting on cybercrime, including some officers of government?

In respect of this meeting, there were extensive communications between the Attorney General’s (AG’s) department and the NCA?

And In fact this meeting and discussions were all geared towards a robust cyber security system for Ghana?

And you also agree that it was discussed between the institutions you mentioned, the need to set up a cybersecurity or surveillance system in order to monitor the cyberspace of Ghana?

And in fact issues of a site for such a system was discussed. Do you recall that?

So it is correct to say that discussions leading out to the purchase of the Pegasus equipment and its citing were not matters shrouded in secrecy?

If you look at the various correspondence, it shows that there was awareness in the government, the security agencies and the Attorney General. So this decision was not taken or down in secrecy.

All the relevant actors of state had prior knowledge of the discussions and the decision to acquire and set up a cybersecurity system to monitor our cyberspace?

Yes. If you look at the email from the Council of Europe from a person called CalagiPolixina, the email specified all the institutions who needed to take part in this meeting.

DPP and the Cyber Security System

As part of the cross-examination of the 2nd Accused person by lawyer for the fifth Accused person, some electronic mails (emails) exchanged between Yvonne Atakora Obuabisa and one Etta Mensah, a former secretary to the NCA Board of Directors, were tendered.

The defence lawyer, sort to use the said emails to impress upon the Court that, the Director of Public Prosecutions, who led the State in the Prosecution, knew about attempts to establish a cybersecurity system for Ghana.

The DPP, however, objected to the tendering of the emails, explaining that they are not in any way relevant to the instant trial. She indicated that the emails trail bordered on correspondence between her and the NCA concerning an international cybersecurity conference organized by the Council of Europe, in Bucharest, Romania.

Justice Eric Kyei Baffour’s Court went ahead to admit the emails into evidence for what it is worth.

The defence lawyer in his further cross-examination and relying on the emails suggested as follows;

Once again Etta Mensah, forwarded to you all such correspondence to the cybersecurity system and its set up?

You agree that the email you just readout was in respect of a visit to a site for a cyber system?

Yes. The attachment was from the Council of Europe.

Kindly confirm to this court whether the Yvonne as stated in the email was the liaison of the Attorney General?

Kindly also confirm to the court who the said Yaa Obuobisa or the said Yvonne is?

She is the current DPP. She was the acting DPP at the time this correspondence was going on in 2016, when I was the Director General of NCA.

The Prosecution and Adjournment

Yvonne Atakora Obuabisa, was then invited by the Court to begin her cross-examination of the 2nd Accused person. After two preliminary questions, Justice Eric Kyei Baffour, ended proceedings for the day and adjourned sitting to February 4, 2020, for the cross-examination to continue.

According to the facts of the case, as presented by the A-G, Baffoe-Bonnie, Tevie, Ensaw and Osman, were allegedly aided by Oppong to engage in the criminal act.

It said the previous administration had contracted an Israeli company, NSO Group Technology Limited, to supply listening equipment at a cost of $6 million to enable the authorities to monitor conversations of persons suspected to be engaged in terror activities.

A local agent, Infraloks Development Limited, charged $2 million to facilitate the transaction, bringing the total sum to $8 million. The facts explained that the National Security, did not have the money to fund the transaction and for that reason, the NCA, which had supervisory jurisdiction over the use of such equipment, was asked to fund the project.

It said $4 million was withdrawn from the NCA’s account, while $1 million out of the withdrawn amount was deposited into the account of the Israeli company.

The A-G explained that the remaining $3 million was lodged in the account of Oppong, who acted as a representative of the local agents, Infraloks Development Ltd.