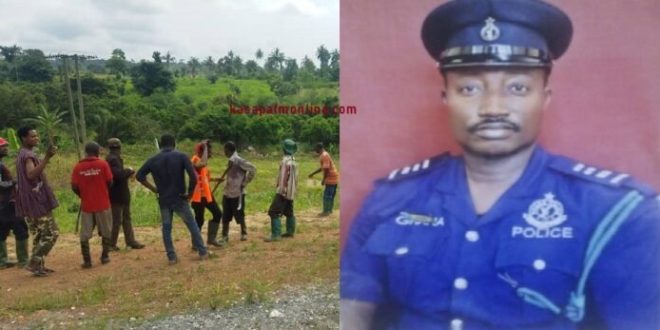 About six hours of search through the bushes at Asuboi and its surrounding villages in the Eastern Region by a search team of youth and Police CID personnel Sunday, November 1, 2020 for the missing Police officer yielded no results.

The Police were hopeful that, the missing officer could be found having combed the entire area and surrounding villages where he was reportedly seen before his disappearance but were not successful in the operation.

50-year-old Police officer -Charles Adamu who is a driver at the Police Hospital in Accra reportedly went missing Friday, October 30, 2020 when he visited his plot of land at Asuboi area in Ayensuano District.

His wife reported to the Police that her husband did not return to the house since that day.

Police investigators went to the scene and found a Police vehicle used by the missing officer parked at the roadside near his plot with the ignition key on and has since been taken to the Police station.

Kwaku Afari – former Assemblymember for Asuboi electoral area told the media that, Chiefs in the area beat the gon-gon Sunday morning to mobilize youth in the area to assist Police Personnel from Suhum Police to search for the missing Police officer.

Previous Boy, 9, drowns after downpour in Koforidua
Next WAEC speaks on 2020 WASSCE results