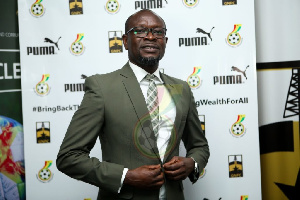 Former Ghana international Frimpong Manso believes it may be too early to write off new Black Stars coach CK Akonnor after losing his first game at the helm against Mali on Friday.

In their first match of 2020, the Black Stars suffered a 3-0 defeat in an international friendly fixture against the Eagles in the Turkish city of Antalya.

Akonnor was appointed Ghana coach in January, replacing James Kwasi Appiah. He has had to wait until October to lead the team into action for the first time due to disruption of the international match calendar by the coronavirus pandemic.

“It’s too early to say that coach CK Akonnor is not capable of handling the national team,” Manso told Space FM. “It’s just one match he has played. Let’s have patience for him and support him.”

Lining up in a 4-1-4-1 formation, Ghana were stung early in the game when Hamari Traore beat left-back Gideon Mensah to strike a shot past goalkeeper Lawrence Ati-Zigi in the third minute.

Traore then turned provider four minutes after half-time, setting up El Bilal Toure for the second goal of the match.

RB Leipzig midfielder Amadou Haidara then sealed the win with a cool finish 15 minutes before the end.

“It [4-1-4-1] a formation the players are used to in their various clubs, so it is not something new to them,” Manso said on Akonnor’s approach to the game, which has been criticised by a section of fans. “Some players are fading out so we need to bring new boys on board to fit it.

The Black Stars will be hoping to make amends when they face 2022 World Cup hosts Qatar in a second friendly meeting in Turkey on Monday.

The two games form part of the Black Stars preparations for resumption of the 2022 Africa Cup of Nations qualifiers in November when Akonnor’s outfit will be taking on Sudan in a double-header.