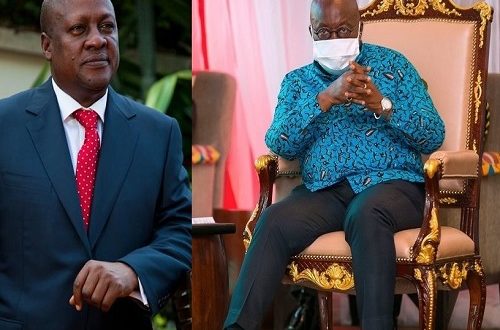 The Presidential Candidate of the National Democratic Congress(NDC), John Dramani Mahama has said he shares a common interest with his opponent in resorting to the courts to challenge the results of an election.

He claimed he has the same belief in seeking justice at the court just as his opponent [Akufo-Addo] did while he sought to challenge the results of the 2012 elections.

Critics have appealed to the former President to concede defeat and ignore going to court to challenge the 2020 polls.

The 2020 flag-bearer for the Great Consolidated Popular Party (GCPP) Dr Henry Larty who doubles as the Secretary-General for the West African Association of Political Parties has expressed worry over Mr. Mahama’s unwillingness to concede defeat in the interest of peace just like some flag-bearers who have already conceded.

“Mahama is being pushed to do what he is doing, I have no idea of who is behind this; he wouldn’t want to do this at all. I may be wrong but I have a feeling that there is a caucus that is pushing him. You’ve lost the election, he shouldn’t go to court; it’s a waste of money.’’ he told Agoo FM in Kwahu.

Reacting to this in a televised message to Ghanaians after his party officials filed a petition on Wednesday, December, 30 to challenge the results declared by the EC, Mr Mahama said he stands on the same principles that his opponent, Akufo-Addo upheld when he went to court to challenge the 2012 election results.

He added that he’s been compelled to do this because of the EC’s clear failure to act in accordance with the constitution.

“Indeed in 2012 when the election was called in my favour my opponent challenged the results as was his right and he took the matter to court. Eight long months of an election petition filed from destroying our democracy rather reinforced our commitment to it and affirmed the strength of our institutions particularly the Judiciary…

“Some people have asked me what I hope to gain by challenging the results of this election. Let me tell you! I want perhaps the very same thing that my opponent wanted when in 2012 he challenged the results of that election, I want the removal of doubts, I want for us to know that our elections should be free fair and safe, and that we do not have to settle for a process that leaves us confused and with more questions than answers. I want a Ghana that our institutions of state can be held to account where we can stand on principle and demand transparency without the risk of losing our lives. When people lose their lives as seven people have done in the course of our election, we are moving backwards not forward, we’re unravelling the very fabric of our democracy, we are risking the loss of three decades worth of progress.”

Flagbearer of the opposition National Democratic Congress (NDC) has petitioned the Supreme Court to annul the results of Election 2020.

Ex-Mahama further wants the court to order for a re-run of the polls hence the need to issue a fiat restraining President Akufo-Addo from holding himself as the President-elect.

Other reliefs sought by the Former President include a declaration that the Chairperson of the EC, Mrs Jean Mensa, breached the 1992 constitution, specifically Article 63(3) with the declaration that she made on December 9, 2020.

Also, the former President is asking the apex court of the land to declare that based on the data contained in the declaration “ no candidate satisfied” the more than 50 percent threshold required to be declared a winner of the presidential poll.