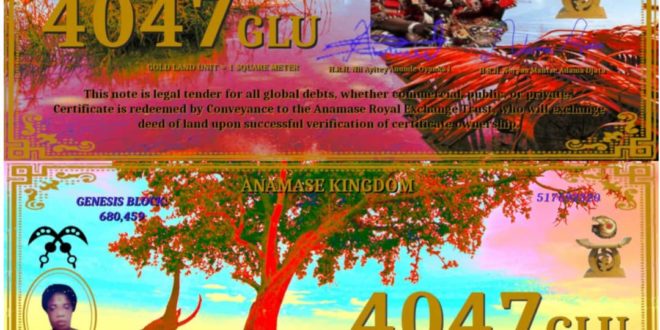 This is More than Eco and Beyond West Africa. King Oyanka Noted During An Interview With a South African Based Television. His Royal Majesty Nii Ayitey Anumle Oyanka is a Royal Decendant of Royal Amazons Warriors of Benin Kingdom founded by Queen Tassi Hangbe in West Africa and Traditional Ruler and Leader for Tunmma Royal Dynasty of Ga State.

About “Eco” The eco is the name for the proposed common currency of the Economic Community of West African States (ECOWAS). Plans originally called for the West African Monetary Zone (WAMZ) states to introduce the currency first, which would eventually be merged with the CFA franc which is used by the French-speaking west African region within the West African Economic and Monetary Union (UEMOA). This will also enable the UEMOA states to gain complete fiscal and monetary independence from France. The UEMOA states have alternatively proposed to reform the CFA franc into the eco first, which could then be extended to all ECOWAS states. 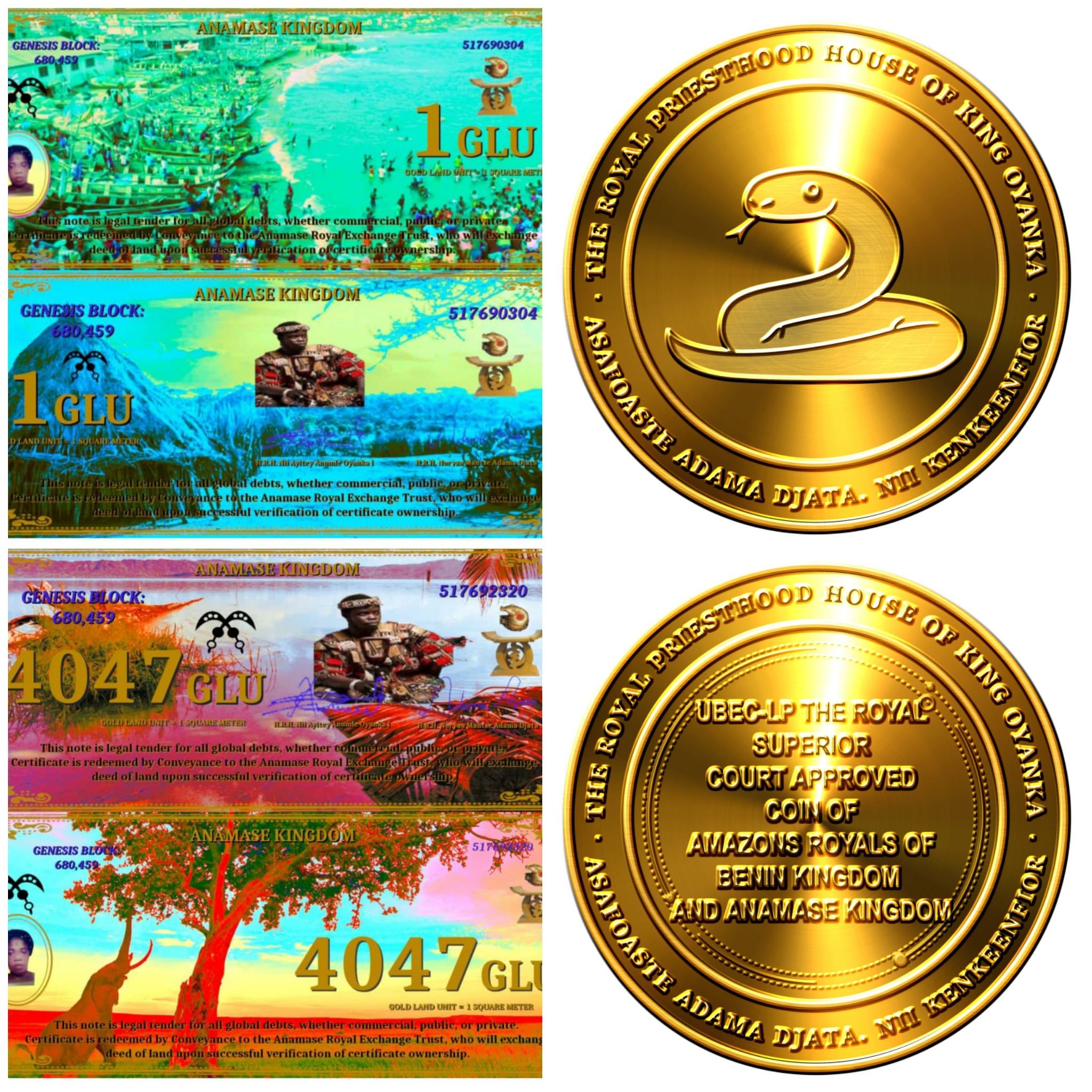 King Oyanka’s Royal, Traditional,  NFT and physical banknotes is now Internationally recognize note which was filed in USA, accepted, and received being approved by the American Superior Court on Wednesday, September, 2021.

The Patty Baker Cherokee County Clerk of Superior Court of the United States of America also has the record of the file number 028-2021-002070.

Aside governments, no King or individual has ever printed money and used it globally. The “GLU” or “Gold Land Unit” note was created on the Bitcoin and Counterparty Blockchains and approved by both the Abola Piam and Anamase Royal Councils on June 26, 2021. 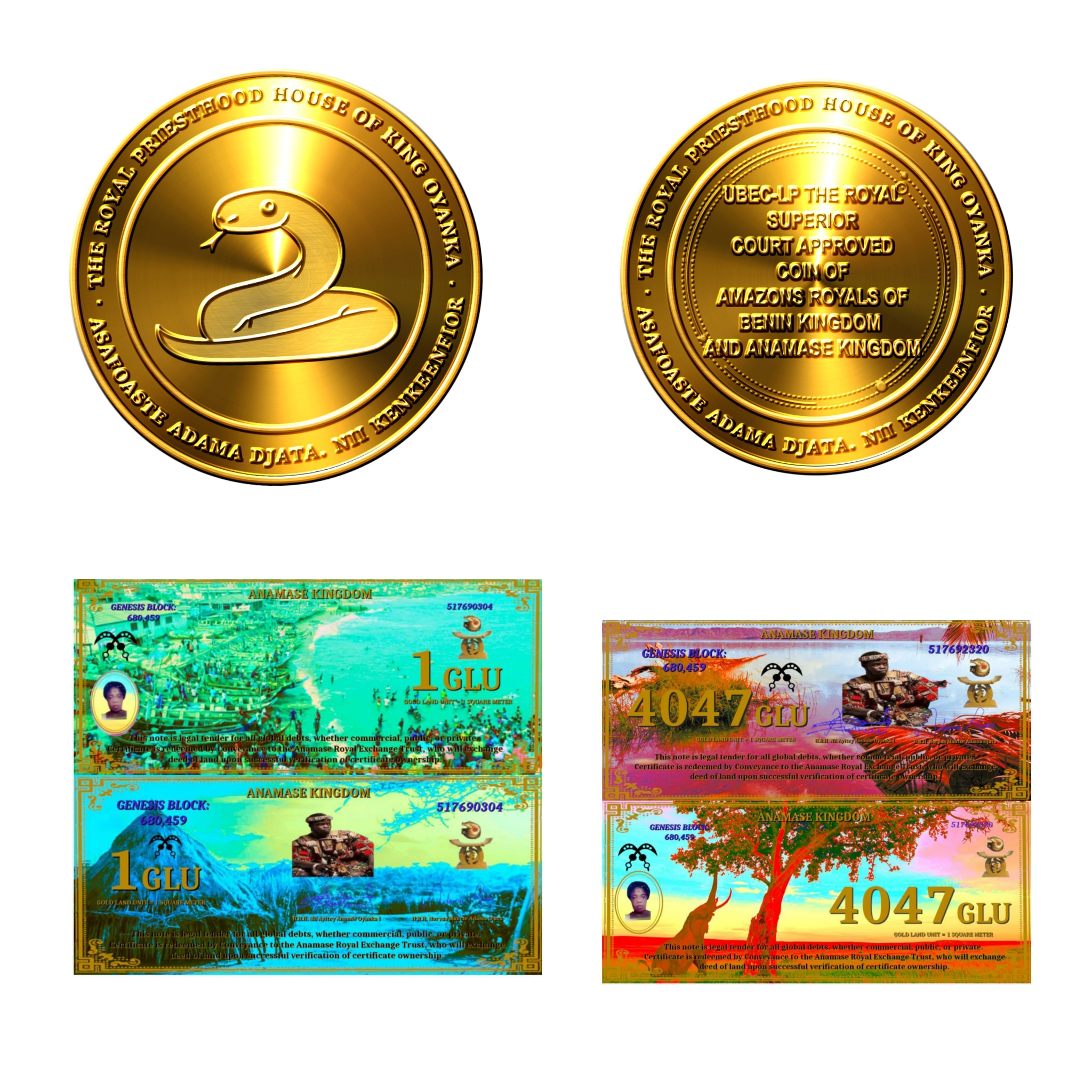 This came in the deal that saw The President of Exxon with the VP of Enercor and Vanguard Energy (the second-largest energy company in the world) Acquiring King Oyanka Traditional Royal Bank Notes (GLU NOTE) worth 12 Million Dollars Which also comes with  a Coin created for the new company called Gigatonne which can be identified on the blockchain chain network below: https://xchain.io/asset/GGTCARBON

Again from  August 16, 2022, “Ubec-lp was  Listed on Coinmarketcap with 3 million worth of liquidity within 2 to 3 months and between August and October has moved to over 5b in Liquidity.  The world and Crypto world in general must have released that this feats has never been chalked or achieved by any other Royal Royal Leadership in Africa and the World nor Any Governments or Institution.

This is Traditionally Spiritually Created Ancestor Royal Currency through the magical feats of King Oyanka and Adama Djata.

Most greatest achievements recently behind the door for King Oyanka and Adama Djata is mouth watering and unbelievable and more so historical as they have created  Coin under the province of Glu Notes and Oyanka Coin for 40 Plus Traditional Royal Kingdoms in Africa,  Private Organizations,  Companies and Individuals which can be tracked and identified on world most popular Crypto or digital trading platform “Coinmarketcap” and “pancakeswap ”

Above are the List of Kingdoms, Companies and Individuals Whom Has Benefited and yet to be considered to operate,  trade and commerce with the Traditionally Approved Royal Digital Currency Already Trending on all major Blockchains.

Previous 15-year-old student hangs himself
Next Watch Adwoa Safo’s first public appearance upon return, thanks God for a challenging 2021