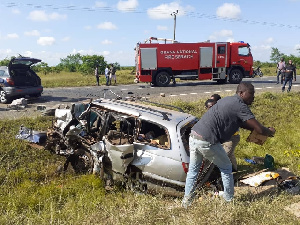 Driver dies after being trapped under accident car for 8 hours

A driver has been confirmed dead in a fatal accident involving a container Truck transporting alcoholic beverages belonging to Joy Dadi company on the Apirede to Somanya road in the Eastern Region.

The deceased, identified as Samuel Adu Gyan, 28, was trapped under the vehicle for eight hours before his body was removed. The injured – both sales personal are Nordjoe Michael and Iddrisu Sulemana.

According to the Public Relations Officer of the Eastern Regional Police Command, DSP Ebenezer Tetteh, on reaching a sharp curve, the deceased driver lost control of the vehicle and crashed into a valley on the near side of the road.

The two sales personnel escaped with minor injuries but deceased got trapped under the vehicle and died on the spot.

Police personnel from Adukrom Police Station and Ghana National Fire Service from Mampong Akuapem arrived at the scene with fire engine but could not retrieve the trapped driver. The fire engine reportedly nearly caught fire in the process.

A Towing truck with registration number GE 246-12 brought later from Koforidua saved the day by removing the accident vehicle from the deceased by 8:28pm.

The body of the deceased has been deposited at Tetteh Quarshie Memorial Hospital mortuary for autopsy and preservation.