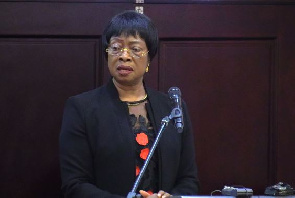 As part of government’s e-Transform Programme that seeks to automate the existing manual filing systems within the Court’s Registration, the Judicial Service has rolled out the e-Justice System.

According to the Judiciary, duplication of suit numbers, handwritten documentation and manually created files, manual payments, and receipts for court processes; which may result in fraudulent activities, delays in court processes, among other challenging factors will be a thing of the past.

With the introduction of the e-Justice System, there will be an electronic platform for process filing, process service, fee assessment automated allocation of cases to Courts/Judges’ calendar management and the execution of court decisions for all cases, causes and matters filed in the Registries of the Court.

The Judiciary Secretary said the introduction of the electronic platform ushers in a new phase of the Judicial Service which will prevail on accountability, transparency, and efficiency when it comes to justice delivery in Ghana.

Speaking at the launch of the e-Justice System at the premises of the Complex Law Courts, President Akufo-Addo maintained that the paperless court system operates with minimum interference hence there is a guarantee of greater delivery in our Judiciary System.

He adviced that it is critical the Judiciary maintains the confidence of Ghanaians by effectively using the electronic system as many have, on countless times, been let down by the courts of law.

Delivering his speech as the Special Guest of Honour at the event, he said, “We have witnessed several instances of people feeling short changed because of the cumbersome nature of the processes involving filing cases. Some, along the line, gave up on the Justice System. Justice must be done to all manner of persons without fear or favour. This is the true meaning of equality within the concept of the law.”

He lauded the initiative adding that the innovation is the recognition of the fact that lives are ruled by digitalization which will help bridge the gap in technology at various levels.

On her part, Her Ladyship Chief Justice (CJ) Sophia Akuffo said she was happy that the unacceptable delays in justice and frustration of Lawyers have come to an end with the introduction of the e-Justice system.

“The effort is a culmination that has spanned several years and it’s born of the clear need to reform the system we have where poor paper based processes and record keeping of are the cause of unacceptable delays in justice administration to the frustration of Judges, Lawyers as well as those who come to the court in such of justice.” The CJ said.

Explaining how the electronic will be administered at the various the CJ stated, “Our recording systems are integrated into this current system because we will not be running any parallel systems – Criminal tracking system will also integrate into this system and when we get to lower courts their system will also feed into what we are inaugurating today. So we will have a seamless justice administration and delivery system that will speed up the processes from commencement of suit up to the final Appeal.”

She disclosed that piloting has gone on for some months with staff at the Law Court Complex navigating their way around the system.

Communications Minister, Ursula Owusu-Ekuful, commending the Judiciary stated that the e-Justice system is a timely initiative it saying it was prompt action by the Judicial Service to improve the quality of service delivery using information and technology.

As a Lawyer herself, she said she was glad “the era of missing dockets, poor record keeping is now a thing of the past for the 43 courts.”

The project is wholly sponsored by the World Bank through the Ministry of Communications. The Judicial Service of Ghana is the implementing agency and a South African firm, Messrs. EOH, is the Solution Provider, with an American company, Messrs. Leading Associates, playing a supervisory.