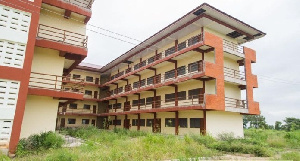 The single-track school, which started operation in May, this year, and admitted 105 students with only 87 reporting, is in its second semester with vacation expected to be due in December.

A visit by the Ghana News Agency (GNA) to the school at Agblekpui showed a new-looking E-Block, a furnished library, a science laboratory installed with some immovable apparatuses, about 250 classroom furniture and, students in two classrooms for their core subject lessons.

Mr Shadrach Kwame Abiwu, Headmaster of the school in an exclusive interview said the school, which currently runs four programmes had some challenges, especially with staff adequacy.

He said the school had teaching staff strength of seven including him and his assistant hoped the situation would change during the next academic year because teachers remained one element indispensable towards learning and improving students’ academic performance.

“We run four programmes: General Arts, Business, Visual Arts and Home Economics. We intend to add Science and Technical programmes next year. For now, though we have a science lab with some installations, there is a need for other equipment to be installed before rolling out the programme.

Because the school started (May 14) when teacher transfer time was over, we could not get enough teachers to take students through the various subjects. For now, just the seven of us are managing both core and elective subjects and it is not helping because out of the four departments, only Business can be said to be fairly catered for.”

Mr David Agbeli, contractor of the Aflao Community Day Senior High Technical School project told the GNA that he had returned to site following the opening of the school to finish the minor work left.

He disclosed that he had notified the Ministry of Education of the completion of work on the project and for official handing over to be done.

Aflao SHTS, a Ketu South E-Block project awarded by the Mahama administration in 2015 to be executed within 18 months delayed for years over alleged lack of commitment on the part of governments to see to its completion.

The Ghana Education Service in March, this year, posted a headmaster to the then almost completed E-Block project to oversee its operationalisation, but got some residents doubting if the school could effectively operate in such a state.