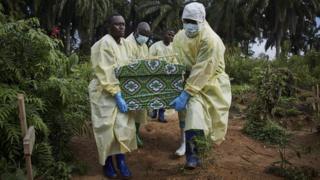 The numbers of people who have died in the current Ebola outbreak in the east of the Democratic Republic of Congo has reached the 2,000 mark, government figures show.

The health authorities have struggled to contain the spread of the virus.

On Thursday, neighbouring Uganda confirmed that a nine-year-old girl with Ebola had crossed the border.

The World Health Organization has called the situation one of the world’s “most complex humanitarian crises”.

This outbreak, in the east of DR Congo, is the second largest on record with the number of cases now exceeding 3,000, according to the government.

In Uganda, the girl with Ebola was isolated and transferred to an Ebola treatment unit.

Uganda has maintained largely successful screening centres along its border with DR Congo in an effort stop the outbreak crossing the frontier.

There were two Ebola cases in the country in June. A Ugandan man and his Congolese wife lost two sons after their return from a trip to DR Congo to see relatives.

What is being done to control the outbreak?

In DR Congo, the health authorities, working with NGOs, have been vaccinating health workers and people who have been in contact with suspected Ebola cases, but it has been difficult getting the spread of the virus under control.

Insecurity in the east of DR Congo and people’s suspicions of treatments have hampered efforts.

About 200 health facilities have been attacked in the country this year, causing disruption to vaccinations and treatments. In one incident, family members assaulted health workers who were overseeing the burial of their relative.

A 2018 study published in the Lancet medical journal says “belief in misinformation was widespread” concerning the Ebola outbreak.

In a statement, the WHO called on countries and NGOs that have offered help to “increase their presence in the field to stop Ebola and to address one of the largest and most complex humanitarian crises in the world”.

How serious is the DR Congo outbreak?

The current outbreak in eastern DR Congo began in August last year and is the biggest of 10 to hit the country since 1976, when the virus was first discovered.

In July, the WHO declared the Ebola crisis in the country a “public health emergency of international concern”.

But it is dwarfed by the West African epidemic of 2014-16, which affected 28,616 people, mainly in Guinea, Liberia and Sierra Leone. About 11,310 people died in what was the largest outbreak of the virus ever recorded.