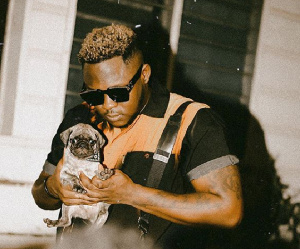 Rapper Medikal has stated that he doesn’t regard himself as a star or celebrity and as such would like to be seen as a mere citizen.

According to him, there are so many celebrities in the country who live a ‘fake life’ just to impress the general public, something he said he will never do.

“I don’t classify myself as a celebrity because at the end of the day. I belong to the street; I am just like you. I am not a star when you see me in town you can approach me for a photo,” he stated.

The hip-hop artiste has been in the news following his remarks against some Ghanaian celebrities who brought President Nana Addo Dankwa Akufo-Addo under attack in what they termed as his silence on police brutality in the West African country, Nigeria.

Speaking on the back of this development in an Instagram live video on Thursday, October 22, 2020, monitored by GhanaWeb, he reiterated that as a citizen, he is allowed to comment on issues without being tagged as a member of any political party.

“To all the false celebrities who live a fake life to make things seem that everything is legit should be very careful. Every celebrity is a human being just like you and I, as for me, I don’t classify myself as a celebrity,” he noted.