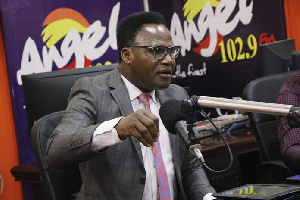 Somewhere in a West African country, separated by a distance of over 10,000 kilometres, a self-acclaimed prophet is able to, albeit in the spiritual realm, see and anticipate how the United States of America will be like, post the Donald Trump era.

According to Prophet Amoako-Atta of the Lord’s Parliament Chapel, Donald Trump will be a thorn in the flesh of the Biden administration and will instigate riots in the country.

He said on Angel FM that the violence witnessed in the US recently is a tip of the iceberg and that Trump will cause more trouble when he leaves the White House.

He predicted that the American economy will shoot up in February and March before crashing the subsequent months.

He issued a warning to the Speaker of the House of Representatives, Nanci Pelosi to be cautious of Trump and take measures where necessary.

Salifu Amoako, however, said the shutting down of Trump’s social media handles will help deal with his excesses.

“Tell Nancy Pelosi that she is dealing with the most dangerous man on earth called Trump. He will be more dangerous to the US after he leaves power…they are lucky he has been banned from social media, otherwise, he would have turned America upside down, he will rule half while Biden also rules half…,” he added.

He also declared that some major technology companies in the US will collapse.

“All the tech giants are going to collapse, God is going to shake them because as the days of Noah…Trump will be more dangerous, more powerful after he exits power…,” he said on Angel 102.9 FM’s Anopa Bofo on Wednesday.