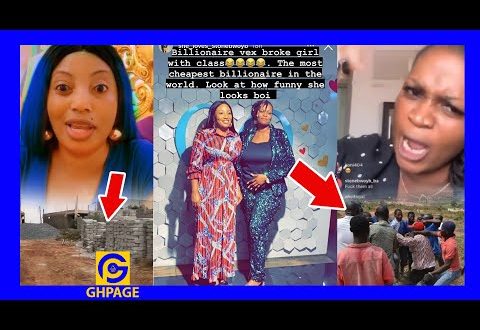 Ayisha Modi and Diamond Appiah dirty themselves on social media

Tensions have heightened between two popular Ghanaian socialites, Ayisha Modi and Diamond Appiah, who have been at each other’s throats over a piece of land.

Earlier in March 2022, Ayisha alleged on social media that she has been duped by Diamond after paying $40,000 for a piece of land situated at East Legon.

Ayisha said she has since not received the land documents after paying in full, 2-years-ago, adding that all she gets are excuses upon excuses.

The outspoken socialite in a series of rants on social media said Diamond always brings up the excuse that the man who originally owns the land has travelled hence the documents are inaccessible.

“I have sent messages, I have asked people to call you for my land papers and u kept telling them the Man you bought the land from is not in Ghana. Madam point of correction I don’t know any man and I don’t care, all I need is my land papers. I will post the date that money was transferred to your account in Ghana for u to see how long and how patient I have been with u.

“Enough is enough rich lady. I beg you in the name of God or else what will happen will happen. $40,000? I won’t let it go. Am giving you by the end of this month for u to give me my land papers which have been fully paid for, if not all hell will break loose. Thank you, my rich woman. I repeat myself I don’t know any man and besides, I didn’t make any payment to anyone but you. If u want peace in East Legon kindly just give me my land papers. You and I know the deal. Eish, what kind of Rich women mpo nie? Boi,” she earlier stated in series of rants on Instagram.

But things have taken a different turn, as Diamond Appiah, in a heated Instagram live disclosed that she no longer wants to sell the land and that Ayisha should come for a refund.

Ayisha Modi on the other hand insists that she wants the land and is still demanding its papers.

According to Ayisha, she had already started constructing a fence wall around the said piece of land.

In a bid to prove her seriousness, Ayisha stated that she has deployed land guards to monitor activities on the land and prohibit encroachers, especially, from Diamond’s camp.

This was contained in a viral video where some landguards were spotted issuing threats to Diamond Appiah.

“Is this the land you claimed to have started working on? If you are a woman like me, come close to this land again and let’s see. I said I’m no longer interested in selling the land anymore. Come for your money. But if you won’t heed to that, then try anything funny on this land and you will see.”

Previous See what is happening at Aflao border
Next WATCH: Brother Sammy’s wife defends her husband on live TV