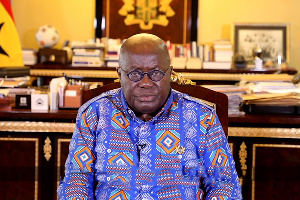 Government would from next week announce steps to ease restrictions imposed on citizens due to the outbreak of the coronavirus pandemic, the President, Nana Akufo-Addo has revealed.

Currently, stakeholders are concluding discussions on the way forward towards the easing of restrictions, the president announced when he addressed Muslims during a virtual celebration of this year’s Eid ul-Fitr on Sunday.

President Akufo-Addo was upbeat about social and economic lives returning to normal soon.

“I expect these consultations to conclude this week, so that I can announce to Ghanaians a clear roadmap for easing the restrictions. We have to find a way back, but in safety, for we cannot be under these restrictions forever,” he declared.

According to the president he has been “fortified” in this view by three considerations.

“Firstly, sad though any premature death is, the hard fact is that the rate of deaths in Ghana amongst confirmed cases is very low – one per one million, i.e. 0.0001%, one of the lowest in Africa, and, indeed, in the world, this, despite the very high number of tests we are carrying out. This has been so since the very beginning of the outbreak over two (2) months ago. The number of positive cases stands at six thousand, six hundred and eighty-three (6,683), out of one hundred and ninety-four thousand, seven hundred and sixty-three (194,763) tests conducted, with one thousand, nine hundred and ninety-eight (1,998) recoveries. This means that our positivity rate, that is the ratio of confirmed cases to the total number of tests conducted, is 3.43%, which, again, is one of the lowest in Africa, and in the world. Furthermore, virtually all the thirty-two (32) corona-related deaths, that have so far been recorded, were of persons with, what the doctors call, comorbidity, i.e. with other underlying causes and diseases. Most of them died within twenty-four (24) hours of admission to hospital. May their souls rest in peace. It appears that, by the grace of God, Ghanaians are not dying of this virus in the numbers that were originally anticipated and feared”.

“Secondly, the numbers of severe virus cases that have been hospitalised have been persistently low since the outbreak. The fear that our hospitals would be overburdened, and, indeed, overwhelmed has, so far, again by the grace of God, not materialised. As we speak, there are sixteen (16) severe cases in six (6) hospitals across the country, none of them on a ventilator. We pray for their speedy recovery”.

“Thirdly, we now have a more robust mechanism for enforcing our central strategy of defeating the virus – the application of the 3Ts, tracing, testing and treating. The tracing teams are more experienced and more efficient; testing capabilities are no longer concentrated in Accra and Kumasi, but spread more evenly across the country in Ho, Tamale, Navrongo, Takoradi and Cape Coast; treating capacity has been considerably enhanced with isolation facilities better distributed across the nation”.

President Akufo-Addo further urged Ghanaians to eat “our own foods” to strengthen the immune systems as well as adhere strongly to all protocols like wearing masks and social distancing to “enable us to face the future with greater confidence, as we battle to defeat the virus”.