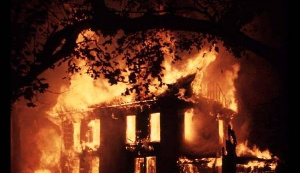 A 74-year-old man has been burnt to death after fire gutted his five-bedroom house at Aburaso in the Ashanti region.

The deceased who has been identified as Stephen Dapaah, is said to be a former Ashanti Regional Director of Audit Service.

Eyewitnesses tell Citi News three other occupants of the house who have been injured, and one other who lost consciousness are receiving treatment at the Komfo Anokye Teaching Hospital following the incident.

The injured include the son of the deceased, his two grandchildren and his daughter-in -law.

The assembly member for the area, Emmanuel Nyanteng who has been narrating the incident to Citi News says the body of the deceased has been deposited at the morgue.

“I was called at about 1:30am that there was a fire outbreak. So I called the fire service to come around. When we got to the scene, we saw the house ablaze. The officers tried their best to secure lives but unfortunately, Mr. Dapaah couldn’t survive. He was burnt to ashes. The others were injured. They are traumatized but are receiving treatment”, he said.