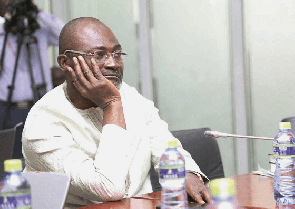 Cedi depreciation has made me sexually weak – Ken Agyapong cries

The Member of Parliament for Assin Central, Kennedy Agvyapong has bemoaned of the depreciation of the cedi citing that it has prevented him from satisfying his wife sexually.

Speaking on the depreciation of the cedi on Adom Tv, the politician who looked fumed about remarks made by the former president and now presidential aspirant, John Mahama concerning the depreciation of the cedi by the incompetence of the ruling government NPP noted that he lost appetite so many times due to how the former President and his NDC mismanaged the economy left by former president, John Agyekum Kuffour.

He was of the assertion that during the tenure and at the end of Kuffour’s reign in government the cedi matched the dollar to the ratio of 1dollar to 1cedi.

He revealed that in 2013, the dollar beat the cedi to 3.1 cedis and it was something which made him lose 25 million cedis at Fidelity Bank where he had locked up his cash for trading when he was travelling out of the country.

Speaking of how it has affected him sexually, he noted that they are all suffering from the depreciation of the cedi because the old government failed to manage it well. According to him, he finds it very difficult to satisfy his wife when the need arises due to inconsistent thinking during the night.

“My wife has to tap me for long before I realise I have something to do with her,” he said.

Many Ghanaians have over the years expressed shock at the perennial sharp depreciation of the Ghana Cedi as against major currencies of other countries, particularly the US dollar.