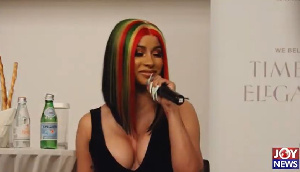 Cardi B explains why she ‘snubbed’ celebrities

American rapper, Cardi B has explained why a much-anticipated meet and greet session with Ghana’s celebrities on Sunday did not materialise.

Many celebrities thronged the Kempinski Hotel in Accra to interact with the star – real name, Belcalis Marlenis Almánzar – who was billed to perform at the Livespot X Festival at the Accra Sports Stadium Sunday night.

But the situation got quite tense when Cardi B did not turn up for the event.

In their anger, some of the celebrities took to social media to express their satisfaction with the development and condemned the rapper who is also an actress for her behaviour.

According to them, Cardi B was eating khebab at the hotel’s poolside while they stood in the basement of the hotel hoping to meet her.

Social media has reacted hilariously to the development after some celebrities lashed out at the rapper for disrespecting them.

But at a meet the press session after most of the celebrities had left the venue, Cardi B said she had no intentions to keep anyone waiting.

According to her, the promoters of the event did not inform her about a scheduled meet and greet with celebrities, adding that it was not in her nature to disrespect others.