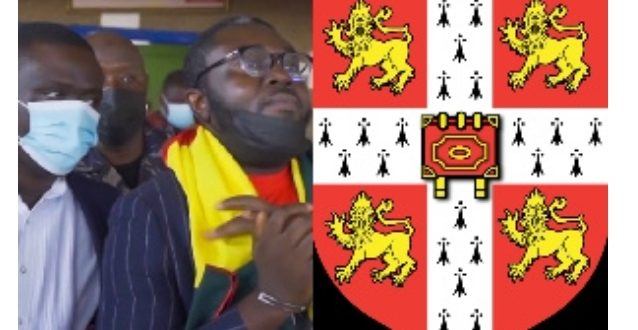 The University of Cambridge has expressed concern about the wellbeing of embattled #FixTheCountry Movement convener, Oliver Mawusi Barker-Vormawor.

The activist, who is a PhD candidate in the English university was arrested by Ghanaian security officials after he had arrived in the country at the Kotoka International Airport on February 11, 2022.

He was charged with treason felony and has since been going through court processes for his trial.

According to the university, it had learned through Oliver’s legal team and confirmed through independent sources that there have been breaches of due process in the treatment of their student by the state.

“Oliver’s legal team in Ghana have warned that there have been breaches of due process in his treatment. This has been confirmed by other independent sources,” the school said.

In view of that, the university said that it has, through its Vice-Chancellor, reached out to Ghanaian authorities and have requested the rule of law be applied to their student.

“The Vice-Chancellor has written to Ghanaian authorities to express his concern for Oliver’s welfare, requesting that the rule of law be applied and that Oliver be granted access to a fair trial,” the notice said.

The university welcomed news of the bail granted Oliver Barker—Vormawor by an Accra High Court on Wednesday, March 16, 2022, but expressed misgiving over the delay of his release following the granting of the bail.

“The University is closely monitoring developments. We welcome the news that Oliver was granted bail by a court on 16 March but we note with concern that, according to the latest information we have received, Oliver has not yet been released on bail,” it said.

Below is the statement as posted on the school’s website: 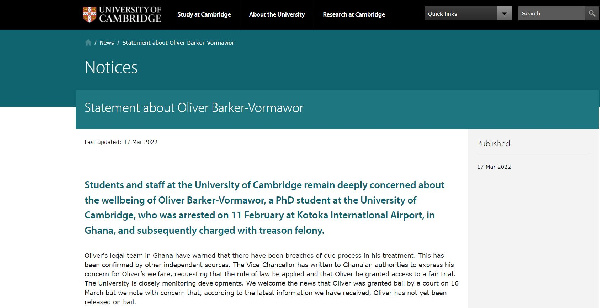 As at the time of filing this report, the Ashaiman Police Command had released the youth activist following the fulfilment of his bail conditions as outlined by the High Court.

For 34 days, the activist stayed in the custody of the police after he was arrested on February 11, 2022, and charged with treason felony in relation to a Facebook post.

His bail, granted by the High Court, was filed by his lawyers after the Ashaiman District Court, had on multiple occasions remanded him into custody, citing its lack of jurisdiction to grant him bail relative to his charge of treason felony.

Delivering the ruling on Wednesday, March 16, 2022, presiding judge, Daniel Mensah directed that the accused presents himself to the police once a week on a day scheduled by the police.

Despite the court’s decision, the activist passed Wednesday night in police custody with the police later explaining the reason that accounted for the delay in his release.

In a statement on Wednesday evening, the Ghana Police Service explained the cause of the delay in the release of the activist citing delays in processing his bail.

“Pursuant to the orders of the court, the Police took the accused person to the Court execute the bail. At the court, the Registrar informed the police that he had submitted the document presented by the sureties to the Lands Commission for verification and he was, therefore, unable to proceed with the execution of the bail until a response was received from the Lands Commission,” the statement from the police explained.

It added, “consequently, the accused person was taken back into custody to await the completion to the bail processes by the High Court Registrar.”

The activist was arrested following a Facebook post in which he threatened to “do the coup” himself if the Parliament of Ghana goes ahead to pass government’s proposed 1.5% levy on electronic transactions into law.

The convener of the youth group whose mainstay has been a demand for an improvement in the condition living for Ghanaians, was picked up by security operatives upon his arrival in the country from the United Kingdom.

The Police in a statement on his arrest said Barker-Vormawor, through his post, had showed a clear intent to usurp Ghana’s democratically elected government and Constitution.

His next court appearance is set to be on March 29, 2022, at the Ashaiman District Court where the state has commenced committal processes for his prosecution.