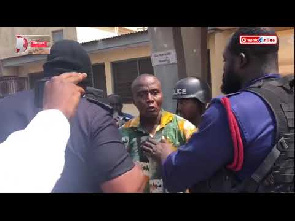 The Accra High Court has thrown out an application by the Attorney- General (A-G) seeking to halt the bail granted to Gregory Afoko, one of the men accused of killing Alhaji Adams Mahama, the Upper East Regional Chairman of the New Patriotic Party (NPP) in 2015.

In a ruling today to dismiss the application for stay of execution filed by the A-G, the court, presided over by Mr Justice George Buadi, held that the A-G’s application was unmeritorious.

According to the court, the A-G failed to argue any exceptional circumstance to convince the court to halt the bail.

The court further held that most of the arguments canvassed by the A-G were already contained in the A-G’s response opposing the bail application which were initially dismissed by the court.

The court further ordered Afoko to report to the headquarters of the Criminal Investigation Department (CID) of the Ghana Police Service every two weeks.

Dissatisfied, the A-G filed an appeal at the Court of Appeal and also filed for a stay of execution at the High Court pending the final determination of the appeal.

Making a case for the application Friday, Ms Mariana Appiah Opare, a Chief State Attorney urged the court to halt the bail because there was the likelihood that the appeal would succeed.

She argued that if the stay of execution was refused, the appeal would be rendered insignificant if it succeeds at the Court of Appeal.

In response, counsel for Afoko, Mr Stephen Sowah Charway, described the application as incompetent, unmeritorious and an affront to the justice delivery system of the country and prayed that it be dismissed.