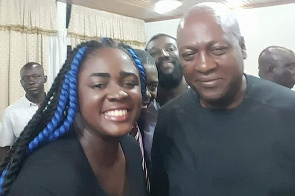 Kumawood actress Tracy Boakye has disclosed that she wants to be buried in a coffin engraved in National Democratic Congress (NDC) colours.

According to her, she loves the party so much thus her desire to be buried in the opposition party’s colours.

For many, it is no news that is a staunch member of the NDC.

For some years now, she has mounted platforms to campaign for the party and its presidential candidate, former president John Dramani Mahama.

Recently, she disclosed that she paid ¢2,000 as her contribution towards raising an amount of ¢420,000 for former President John Mahama as his filing and nomination fee for the NDC’s flagbearership contest.

Tracy Boakye, some months after that, was lambasted on social media following reports that she had said the NDC was a useless party.

Not amused about that allegations, she said came out to clarify that she is a proud supporter of the party.

“How can I say NDC is useless? If I die I should be buried in a coffin with NDC colours because I love them,” she said.

The actress added “My mom is NPP and she hasn’t said anything about it. She is not even surprised because I sneaked out with her car when I was young to attend NDC rallies.”