Oluwatobiloba Daniel Anidugbe, better known by his stage name Kizz Daniel has been arrested in Tanzania.

He was subsequently released Monday night but is expected to attend to the Police this morning.

The arrest was occasioned by the ‘Buga’ hitmaker’s failure to turn up for a performance he was billed for by the organisers of the Summer Amplified Show in Tanzania.

Fans in Tanzania gathered at the Summer Amplified concert at the Warehouse Arena (formerly Next Door Arena) in Dar es Salaam on Sunday, 7th August 2022 to watch Kizz Daniel perform in a sold out show but were disappointed.

According to social media reports, Kizz failed to appear on the Summer Amplified stage because his luggage was yet to arrive in Tanzania from Uganda and he’d refused to wear the clothes offered him in Tanzania.

In a viral video on Twitter, the Afropop singer is seen in a black hoodie and being taken into a Tanzanian police van. This happened in the afternoon of Monday 8 August 2022.

This is a reoccurrence for the Flyboy Inc. head. Recently, videos surfaced of angry fans in the DMV area in the United States demanding a refund after the star kept them waiting for a better part of four hours. 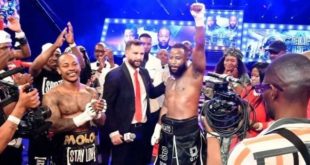