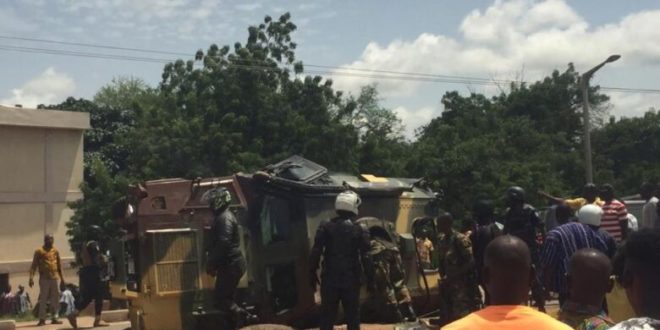 At least four(4) soldiers, all occupants in an armored military vehicle have sustained various degrees of injuries after they were involved in an accident on Thursday morning in Bolgatanga, the Upper East Regional capital.

The accident involving the armored vehicle commonly referred to as MOWAG and another police car was said to be part of the President’s convoy heading to the Bolgatanga Regional House of chiefs on the Bolgatanga-Navrongo highway.

Local reports suggest that the MOWAG was being driven carelessly and on top speed to catch up with the pace of the presidential convoy resulting in the crash.

The injured soldiers have since been rushed to the Bolgatanga Regional Hospital and are responding to treatment.

Meanwhile, the President is said to be addressing the Upper East Regional House of Chiefs as part of his planned official visit to the Region.