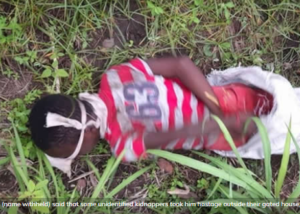 Police investigations have established that the alleged kidnapping of a 14-year old boy at Area 52 in Ho last Friday was a hoax.

The boy, who was found blindfolded with his hand tied in a scar, claimed that his abductors abandoned him after the person they sent him to rejected him for being a male.

But the Ho Municipal Police Commander, Assistant Superintendent of Police (ASP) Alexander Yeboah, says the 14-year old Junior High School student together with his 12-year old friend cooked up the story to avoid being punished for staying out to play.

He told the Ghana News Agency (GNA) that the two hatched the plan to court sympathy and avoid punishment at home when the victim left home on a play adventure on Friday at about 9:30am and returned after 4:30pm.

He said the victim confessed to the Police investigation team that he connived with his friend to stage the story.

Mr Yeboah said since the victims in the matter were juveniles, the Police would review a corresponding punishment for such incidents.