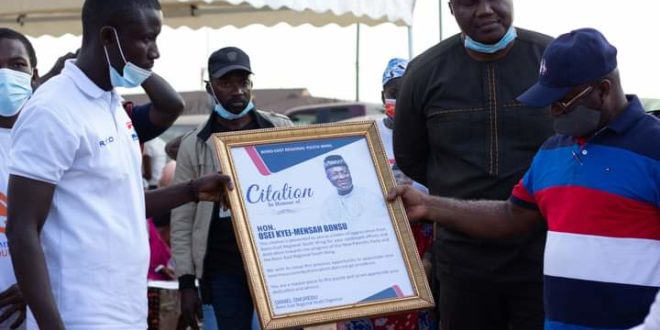 The Youth wing of the Bono East branch of the New Patriotic Party (NPP) has conferred honors on the majority leader in Parliament, Hon Osei-Kyei-Mensah Bonsu.

The wing described the experienced legislator as a person who is passionately dedicated to the development of the country’s legislative assembly.

Presenting the citation to the veteran legislator during the launch of the wife’s foundation at Suame, Daniels Owuredu, the Youth Organiser for Bono East NPP extolled the virtues of the majority leader.

He noted that apart from displaying deep knowledge of the law and the constitution of the republic of Ghana, he the Majority was a complete humanitarian who honors people with his presence at functions he is invited to.

The Youth Organiser asked the people of Suame to vote massively for Hon Mensah Bonsu so that the country could continue to benefit from the expertise of the legislator in constitutional law.

He noted that many wished they had the Suame legislator as their MP in Parliament.

Mr Owuredu urged the people of Suame to show the MP their love by giving him 100 percent endorsement at the upcoming parliamentary polls on December 7.

Presenting the citation and plaque to the Suame legislator, the Youth Organiser asked Hon Nana Ayew Afriyie, MP for Effiduase Asokore as well as the constituency executives and the MCE for Suame, Dr Bobie to ensure that Hon Mensah Bonsu gets the push he needs on December 7.

Showing profuse appreciation for the honor done him, Hon Mensah Bonsu thanked the Youth wing for the gesture.

He said the words in the citation were humbling.

Many times, the legislator noted one is tempted to play down a contribution  one makes since that is the sole duty of being a legislator.

He said for the Youth wing to recognise him in such a way means they value and cherish his modest contribution to enriching the democratic credentials of the Parliament of Ghana.