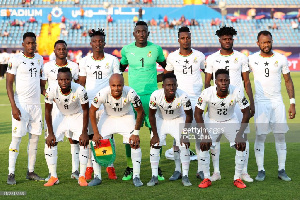 Deputy General Secretary of the New Patriotic Party has added his voice to calls for the inclusion of more local players in the Black Stars team.

Over the years some soccer pundits and administrators have bemoaned what they perceive to be limited opportunities for local players as far as Black Stars call-ups are concerned.

The argument that the teams that won all of Ghana’s four AFCON trophies were dominated by players who ply their trade on the local scene hence the need to give them more opportunities.

According to him, between 80 to 90 percent of his players would have been local players if he was the Black Stars coach.

Ghana has been on elusive search for a fifth AFCON title since winning the fourth one in 1982.

In a recent interview, Mubarak Wakaso who has been part of the team since 2013 blamed the failure on partisan politics.

Wakaso said that the players are divided on party lines and that has impacted negatively on their performance for the country at tournaments.

”I will speak the truth today. Do you know our problem about the game?

”Maybe we know but we don’t want to say it. But I think politics ruins the Blacks Stars at times. When NDC is in power, NPP doesn’t want us to win and vice versa.”

But his teammate Majeed Waris offered a different opinion and blamed it on the team’s coaches.

“I saw Wakaso making a comment that politics is affecting the Black Stars. I feel that it is not the political thing that is affecting the performance of the players on the field because politics does not play football, I think with the national team, the politics affects the selection of players”.

“With me they call you from Europe when you’re performing and always drop you like a scapegoat for players who do not even play half a season and I’m not going to talk about myself alone. I feel the political aspect of player selection is something that is affecting the Black Stars”.

“The selection is not based on your performance, it’s only based on politics in the team and I think it is something that affects us at tournaments because that’s the biggest stage that everyone wants to be part and that’s also when the politics get in a lot” Waris concluded.