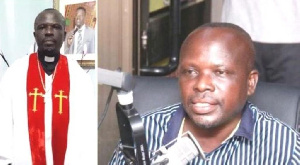 Broadcast journalist, Kofi Adomah Nwanwani has given a chilling account of how Emmanuel Kwaku Apraku, popularly known as Apraku My Daughter, lost all his wealth and became extremely poor.

Apraku My Daughter was found dead in his room in Kasoa yesterday after he went missing for three days with a section of the public suspecting suicide.

Speaking on Adom FM’s Morning Show, Kofi Adomah said Apraku was one of the famous and rich Pastors in the country but because he was extremely benevolent, Apraku became poor and had to beg before he could even feed.

He said due to his popularity, Apraku in the past had several invitations across the globe to preach the word of God, a situation that affected his Churches in Ghana.

According to him, some of the Junior Pastor capitalised on his illiteracy to register the Churches in their names and therefore took over his churches while he spent time Preaching outside the country.

Apart from losing his Churches, Apraku My Daughter helped people secure visas to travel outside the country and also gave out his cars and other properties so that others could live better.

He reiterated that what broke the camel’s back Kofi Adomah revealed was when he dabbled politics though he failed to mention which specific political party he aligned himself to.

Kofi Adomah said Apraku was subjected to several beatings by Soldiers and through that lost his teeth. He said due to the Politics, Apraku lost a number of his properties and that was how he fell from Grace.

Kofi Adomah said even when Apraku became needy after losing his properties, the Man of God continued to be benevolent, dolling out cash donated to him by friends and people he had helped in the past.

Apraku, according to Kofi Adomah, received help from colleague Pastors including Obofour, Kumchacha, and many others who heard of his plight.