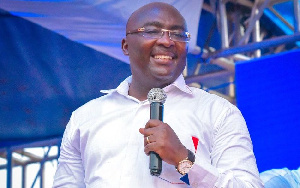 Vice president, Dr Mahamudu Bawumia, has challenged NDC’s pledge of paying footballers who are playing in the Ghana Premier League the sum of one thousand five hundred cedis (GH¢1,500) each as monthly allowance.

Team proprietors in the country toil to settle with players at the back of the month with some outstanding money compiling for many months.

Undoubtedly, the insignificant pocketbooks of the players describe player exodus in the nation; a bump that has badly implicated the local league for ages.

It is for this reason that opposition party, NDC, is ignited to promise a monthly GH¢1,500 payment for the nation’s top-flight players should they be voted into power in the December 7 elections.

But the Vice President of the country, Dr Bawumia has brushed off the John Dramani Mahama governed side’s vow; insisting under no condition will the NDC be competent to do as they have said, bringing into summary the resistance of teachers training stipend.

Speaking on Asempa on Wednesday the Vice President said, “they say they will pay players thousand five hundred as monthly salary? I doubt it.”

The question of which party has sports at heart has become topical recently with a maximum of the political parties factoring it in their manifestoes ahead of the December elections.

Meanwhile, the New Patriotic Party (NPP) government since assuming office are building ten multi-purpose resource sports centres across the nation with a pledge of an extra six for the recently established regions.

Previous Goalkeeper Robert Mensah’s last game for Kotoko before his tragic death
Next Nigeria at 60: What I will do as president – Afrobeats star Ckay reveals [VIDEO]