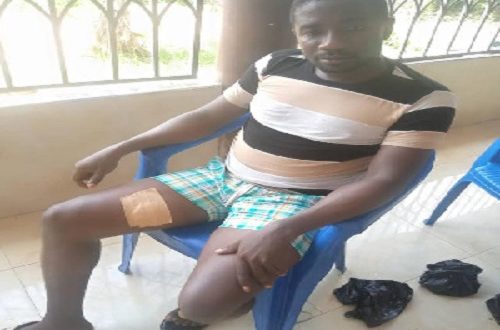 Former assembly member of Kwabeng Electoral Area in the Wassa Amenfi Central Municipality in the Western Region has sustained gunshot wounds after being attacked by armed robbers.

The incident happened when Mr Martin Luther Adjei was travelling from Asankragwaa to Kwabeng on Friday night.

Speaking to Ghanaweb, he explained that he saw the robbers while he was ascending a hill on his motorbike in the middle of the road and decided to run but he was unfortunately seen by the robbers who shot him in the thigh.

Mr Luther Adjei noted that the robbers had blocked the road with a Kia Rhino truck and a tricycle creating an ‘artificial accident’ few meters from where he was shot.

Passengers who had been robbed were seen lying on the road after being robbed of their cash and other belongings.

According to him, he was dragged about a hundred meters from where he was shot to where the other robbery victims were kept.

He said about four cars were robbed after he was shot, however, they could not rob the fifth car because the driver managed to sail through after several shots from the robbers.

This gave the robbers some fears that the driver could report the incident to the police which could cause their arrest. This made the robbers fled and the victims’ lives were saved.

He was rushed to the Asankragwa Catholic Hospital for treatment where he was operated upon to remove the bullets on Friday night and was discharged on Saturday.

Mr Luther Adjei disclosed that over GHC700 and his phone were taken from him by the robbers.

Previous ‘It’s a good day for accountability’: SA reacts as Cyril Ramaphosa appears before Zondo commission
Next PHOTOS: The community where residents hang phones on trees for signal