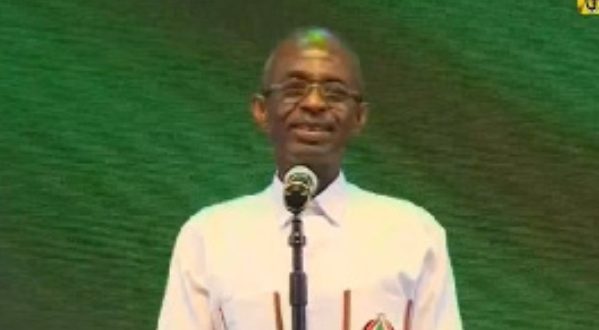 Somebody lied his way into power – Asiedu Nketia

Addressing NDC members at the launch of an app for the Tertiary Education Institutional Network (TEIN) of the party, aimed at facilitating the party’s work on the tertiary education front, he said it is important for the youth to be given special attention.

“No party can survive and continue to win elections without focusing on the youth wing and the women’s wing,” he said.

He then went on to draw a parabolic analogy of how the current administration, led by President Nana Akufo-Addo, won its way into power through lies, now being lost on how to properly run the state.

“Yesterday when we heard His Excellency Nana Akufo-Addo deliver a speech in Cape Coast, somebody called and asked me, ‘General, do you remember the parable you shared at a rally in Ashaiman when we were celebrating our 25th anniversary?’ I said ‘Yes.’ So, this is an occasion to repeat the parable.

“It has to do with somebody who has lied his way into power and didn’t know what to do; how to run a country. So, he approached a philosopher that, ‘How can I run this country? Now, I’m in power, and the people are expecting me to deliver.’

“So, he said, ‘Ok, take these three envelopes. After your first 100 days, people will start demanding the fulfilment of the various promises. So, when the heat starts, go and open envelop number one, there is advice in it. Use it and it will take about one year. After that, when there’s trouble, go and open envelop number 2; it will carry you ahead.

“’Then, when there’s still trouble after you’ve implemented the recommendations contained in envelop number 2, then you’ll go and open envelop number 3 and you’ll have the final solution for your problems.’ So, my man went. After the first 100 days, people started asking, ‘But what are your achievements,’ and the heat was mounting so he went and opened his box, took envelope number one, opened it and the advice written in it was to blame your predecessor.

“The people started asking questions that precisely because your predecessors couldn’t solve it that is why we voted for you so solve the problem and don’t blame your predecessor. Then the heat started again… so he went and opened envelop number two and the recommendation was that, ‘Blame the international community, blame the unfair international economic order…

“So, people started asking and then he called the philosopher again and he said he should go and open the last envelop, the ultimate solution is there. So, he rushed, took the envelop and opened it. The recommendation was, ‘Prepare your handing over notes,” he said.