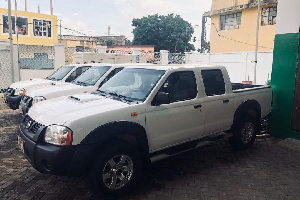 “We have committed one thousand two hundred (1,200) pickup vehicles at the full expense of the NCSSMAG to touch base with at least one million non-member small scale miners at their various mining sites to sell to them the message of the NDC,” the Association said in a statement copied to MyNewsGH.com.

According to NCSSMAG, the decision to rally behind NDC’s John Mahama was informed by the abysmal performance of the ruling party NPP and its flagbearer, Nana Addo Dankwa Akufo-Addo in the fight against illegal mining.

The association continued that, on the election day of December 7, it would also make available a number of vehicles and set up a task force to assist its members and their households to go out in their numbers to vote for the NDC to ensure the victory that would rescue the mining sector from the looting under the Nana Addo-led government.

In the statement signed by the President of the Association, Michael Kwadwo Peprah he described the NPP’s years declared for the fight against all forms of small scale mining as “two bad years of the ban” adding that the government rendered them hopeless, saddled with debts, broke their homes and sent many of its members to the grave.

In the early months of the year 2017 after being sworn in as President of the Republic of Ghana, Nana Addo Dankwa-Akufo-Addo waged war against illegal mining amidst the notion of reclaiming damaged natural resources of the country especially water bodies.

In strengthening the fight, the Operation Vanguard, a taskforce which consisted of officers from the Ghana Police Service and the Military was formed by the current government.

However, with all these efforts by government, the small-scale miners have said the government has failed to curb the menace.