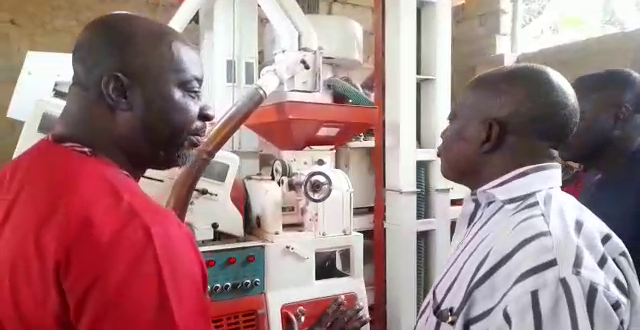 The Ashanti Regional Minister, Hon Simon Osei Mensah on Thursday July 28,2022 inspected  the progress of work on some ongoing infrastructural projects the region.

The regional inspected  a rice processing facility at Agogo owned by Mini Atiepe rice mills which have the capacity  to   produce bags of rice in 50 and 70kilo.

The one day tour which formed part of the minister’s routine field visits was also  aimed at among other things touching base with the district and municipal assemblies in the region.

Some areas the minister visited includes, ongoing works on the Plantain and Onion Market at Agogo, Construction of 3-Storey office complex for the assembly, building of Municipal Fire Station at Agogo, construction of ECG Sub-Station among other.

The minister used the opportunity to meet chiefs, residents and all workers at the Municipal assembly in two separate meetings to understand their problems and proffer pragmatic solutions for them.

Speaking to OTEC News during the tour, Hon Simon Osei Mensah explained that, the projects, being funded by the government are to ensure equitable distribution of developmental projects across the region and the country as a whole.

The Regional Minister after the tour expressed satisfaction at the progress of work on the various projects and assured residents in the area of government’s support in all sectors of the economy in the municipality.

He emphasized that, although the situation has not been dealt with completely, government’s intervention has saved one of  Ashanti region’s food basket from losing thousands of tones of farm produce.

He again assured farmers in the area of government’s total support to boost food security in the region.