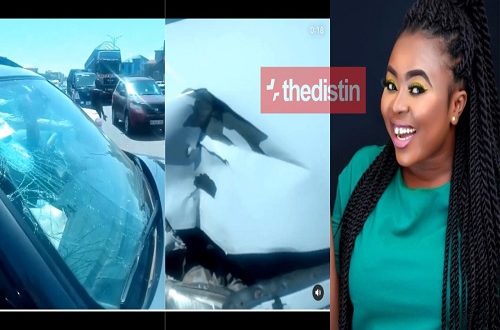 Dr. Kwaku Oteng’s daughter and Akua GMB’s friend, Adu Safowaah has been involved in an accident.

According to a post sighted on Adu Safowaah’s page she revealed that her accident occurred on the Lapaz Stretch Highway after her car collided with a black Mercedes Benz that was overtaking her lane.

Akua GMB’s friend narrated that her car turned 6 times on the ground and she was holding the steer during the misfortune.

Dr Kwaku Oteng’s self proclaimed daughter, Adu Safowaah made headlines after she completely gone ballistic on Stacy Amoateng (Executive Director of the Angel Broadcasting Network (ABN), calling her a demon, an evil person, a snitch, a gossip and any other negative thing one can think of.

Adu Safowaa’s anger was triggered after she tried getting some fliers printed with help from her father’s network and Stacy Amoateng refused to allow the job to be done.

Stacy obviously has a problem with Safowaa and thus refused to allow the fliers to be printed. This set her off bigtime.

She took to social media to record a video response to Stacy Amoateng, completely tearing into her.