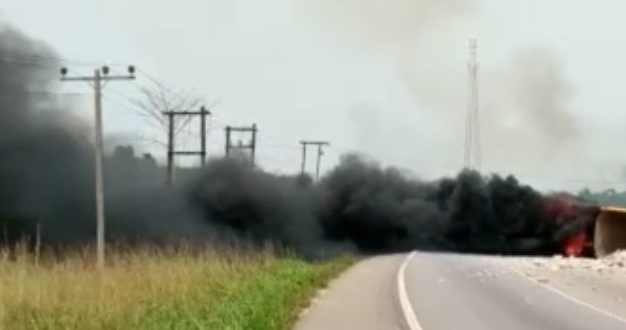 Share
Authorities at the Cape Coast Teaching Hospital have resolved to conduct a DNA test on six female bodies that were part of the Tuesday, March 22 accident at Asemasa as one body is being contended for.

A total of nine out of the 14 burnt bodies from the accident have so far been identified. They included four males and five females.

The Public Relations Officer at the Cape Coast Teaching Hospital, Fred Nyankah, disclosed to Citi News that due to the difficulty in identifying the charred bodies, two families are claiming the body of one female, hence, the move to conduct DNA test for six female bodies to find out their identity.

“We have now identified nine of the bodies, four males and five females. There has been contention as to which family owns one female’s body. We have been doing the identifications using ornaments like beads, and others. These 6 females, if identified, would make the total identified bodies 10.”

“Since two families are claiming the body, we have asked that DNA be done for all 6 females. Our Accra expert came down this morning to pick up their samples. We would only be able to release the bodies after the results have been released in about a week’s time. The Chinese national’s sample was also taken.”

“With the males, it is more difficult to identify them as they do not really have ornaments on them. I would prefer that DNA be done on all the bodies, but it is not in our position to decide, that should be the police’s decision.”

On Tuesday, March 22, 2022, a gory accident happened on the Tarkwa road, a place called Asemasa claiming the lives of 14 people and leaving two critically injured.

The accident happened between a bus returning to Accra, and a Truck carrying stones as the truck’s tyre allegedly burst causing it to veer off the road, leading to a collision with the Ford bus which caught fire and burnt all 14 passengers.