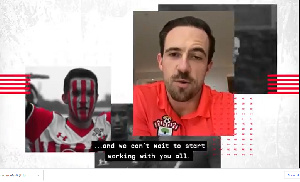 The two times African Champions have been added to Southampton’s International Football Programmes.

The two clubs took to their respective social media pages to announce this partnership deal.

Kotoko has now released the video done by the English side to promote their new partnership.

In the video that has been sighted by GhanaWeb, Danny Ings, Alex McCarthy, and Ghana’s Mohammed Salisu were used as the models for the promo shoot.

“Everybody at Southampton is extremely proud to have you on board and we can’t wait to start working with you all,” Danny Ings said.

Mohammed Salisu” We look forward to working with one of the leading teams in Africa and helping to support young players in my home country of Ghana.”

“Looking forward to meeting and working with you all in the future,” Alex McCarthy concluded.

This Asante Kotoko‘s second partnership deal with an English Premier League club after signing the first one with Sunderland ten years ago.